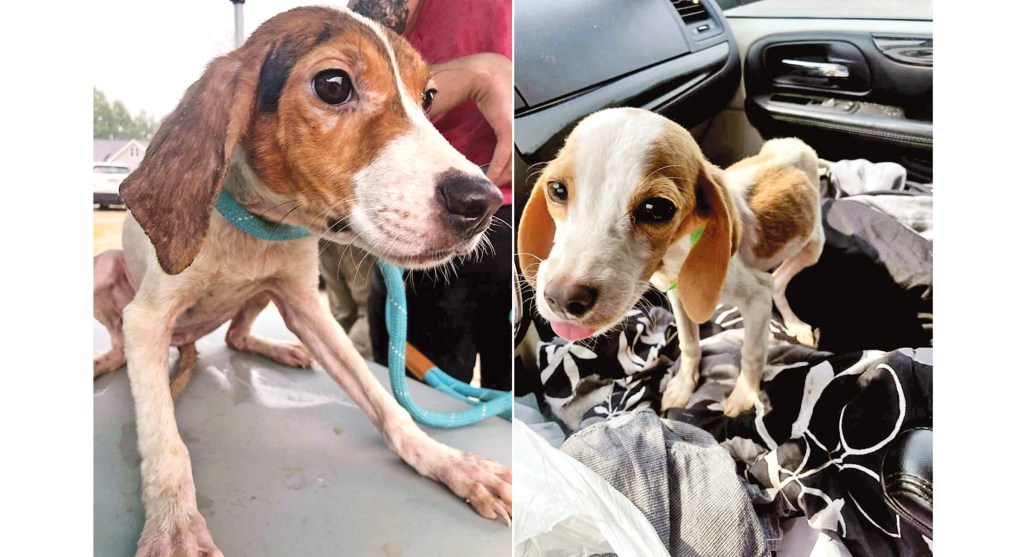 Photos of two of 71 beagles rescued last week by local groups from a seller in Chesapeake. The dogs were under fed and many needed medical help. (Submitted photos)

Local animal groups are looking for donations after rescuing several dozens of beagles from a house in Lawrence County on Friday.

According to Pitiful Paws, a non-profit private rescue group in Chesapeake, they were alerted to a dog in need of rescue last week and after investigating, they decided to approach the dog seller while in plain clothes and did not mention they were part of a rescue group.

They bought two puppies off of the seller.

The group said that one dog was in decent shape while the other would have died if they had left it behind. The seller also threw in an older beagle for free.

They documented everything with their phones and then gave the information to the county humane agent and the Lawrence County Sheriff’s Department.

After an investigation, the sheriff’s office got a warrant and 67 beagles were rescued from the property in two hours with the rescue’s volunteers and veterinarians on hand.

“We typically do med assessments on scene and then transport them but this case was different and because of the hostile environment we had to get on and off property as quickly as we could,” the group posted on Facebook. “We removed 67 dogs from the property, and we had four dogs we had gotten from the property beforehand including Bess (who did not survive) putting us at a total of 71 dogs.”

The animals were rescued by several groups including Friends of Lawrence County Rescue and Midwest Beagle Rescue, Education and Welfare.

The dogs require a lot of medical attention and Pitiful Paws are asking for donations, which can be made through PayPal, PayPal.me/pitifulpawsrescue, by mail to P.O. Box 690 Ona, WV 25545 or by calling Guyan Animal Hospital at 304-736-3456 and ask to donate towards the PPR account.

Or at PayPal.me/FOLCRescue or by mail to Friends of Lawrence County Rescue P.O. Box 150, South Point, OH 45680.