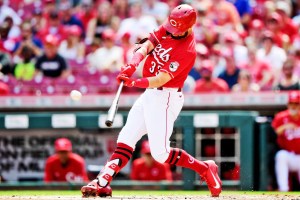 Cincinnati Reds’ Jesse Winker blasts a solo home run in the first inning of a 4-1 win over the Atlanta Braves on Saturday.( Emilee Chinn/Getty Images/Photo Courtesy of the Cincinnati Reds.com)

CINCINNATI — It started with a Bam, added a Wham and closed with a Slam.
Jesse Winker started the Cincinnati Reds’ first inning with a home run, Tyler Stephenson spanked a clinching home run and Amir Garrett struck out the final batter for a save in a 4-1 win over the Atlanta Braves on Saturday at Great American Ball Park.
Mixed into the middle of all that was seven strong innings by starting pitcher Luis Castillo who is returning to his old form. Castillo is now 3-10 with a 5.14 earned run average in 16 starts, but he’s 2-2 in June with a 1.71 ERA and has 32 strikeouts over 31.2 innings pitched.
“I feel like I’ve gotten back to where I was beforehand. The results are showing up,” Castillo said through interpreter Jorge Merlos.
“I’ve been working extremely hard with the pitching coach to get back there. That hard work I’ve been doing these last couple weeks has been there. It’s not about how you start, it’s about how you finish.”
Castillo did not allow a run and struck out six mixing his changeup and slider with a fastball that topped out at 99 miles an hour. He allowed six hits and walked two.
“I think all of my pitches were working really well today,” said Castillo.
Reds’ manager David Bell said Castillo seemed really focused throughout the game and was very aggressive.
“He was on the attack, attacking with what he’s great at,” said Bell. “He was going after them with a really good fastball-changeup combination, locating his fastball well, not being afraid to throw strikes with it and also making good pitches with it. It just set up his changeup.”
Winker scorched a pitch from Braves’ starter Ian Anderson over the centerfield fence for his 18th home run to stake the Reds to a 1-0 lead two batters into the first inning.
The lead went to 3-0 in the third on a Jonathan India single, an RBI double by Nick Castellanos and Joey Votto’s run-scoring single.
Castillo’s shutout performance was aided by a strong defensive play in the sixth inning. Guillermo Heredia singled and William Contreras followed with a two-out double, but rightfielder Castellanos fired a strike to second baseman India who wheeled and relayed the ball to catcher Tucker Barnhart who tagged out Heredia at the plate for the third out.
“There have been a lot of ball hit really hard and we can’t keep the line moving,” said Braves’ manager Brian Snitker. “We’re making good contact here and there.”
Atlanta is batting .135 on 7-for-52 with runners in scoring position over their past nine games which coincides with hitting .190 overall during the same span.
In the top of the third, Ronald Acuña Jr. tried to ignite the Braves with a one-out a double. Freddie Freeman walked but Austin Riley hit a line drive that was snagged by Reds’ third baseman Eugenio Suarez.
“You’ve got to try to create your own luck,” said the Braves’ xxxz Riley. “It’s one of those things where you’ve got to go out there and keep playing the game. At some point, I feel like it’s got to turn for us for the better.”
Winker attributed the Braves inability to get clutch hits and score runs to Castillo’s performance.
“He is electric,” said Winker. “Every time he touches the ball, we walk onto the field feeling we are going to win the game.
“It was amazing to watch him go out there, compete his (butt) off and really pitch another outstanding game. It’s really been fun to watch him.”
Reliever Brad Brach allowed two walks and an RBI single by Heredia in the eight to make it 3-1, but Stephenson blasted a leadoff pinch-hit home in the bottom of the inning to center field off Edgar Santana and it was 4-1.
With closer Lucas Sims on the injured list, Garrett was called upon to close out the game in the ninth and gave up an infield hit to Ender Inciarte before retiring the next two batters and striking out Freeman to end the game and register his fifth save as a season-high crowd of 34,671 cheered.

Reds can’t get clutch hits in loss to Braves