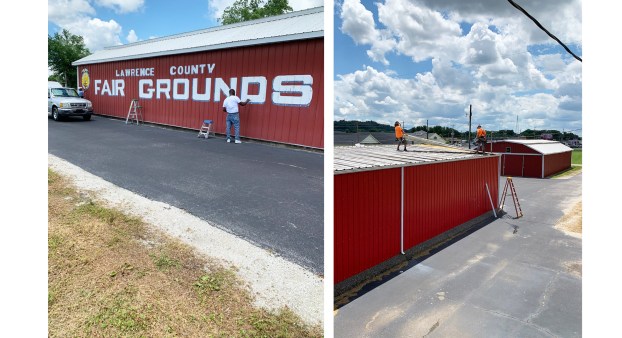 LEFT: Artist Jerry Johnson works on a mural on the old art hall building at the Lawrence County Fairground in Rome Township on Tuesday. RIGHT: Crews from Thoroughbred Construction Group, of Ironton, work to replace a roof on a grandstand building at the Lawrence County Fairgrounds in Rome Township on Tuesday. (Submitted photos)

ROME TOWNSHIP — In two weeks, the Lawrence County Fair will make its much-awaited full return and is expected to draw large crowds to the fairgrounds.

And, this week, the site was busy as workers made upgrades and got ready for the big event.

A crew from Thoroughbred Construction Group, of Ironton, was on hand Wednesday, putting a new roof on the Payne Building by the grandstand.

Chris Collier, fair board vice president, said that upgrade, as well as new LED lighting, was paid for from a no-match structural improvement grant received from the state.

“We got a good deal from them,” Collier said of the construction company. “They’re always helpful with every dime saved.”

Collier said once the upgrades are made, the state will reimburse the fair board for the costs.

The fair board received an additional $50,000 from the state when Gov. Mike DeWine made funds available to each of the 94 county and independent agricultural societies in Ohio.

Those funds were used to purchase new scales for animal weigh-ins, as well as PA system upgrades, with the rest going to operating expenses.

In addition to the roof work, a new paint job was being done on the old art hall, which hosts 4-H projects and other booths, by Jerry Johnson.

Collier said the outside mural will feature Lawrence County Fair signage, as well as an FFA logo.

On Wednesday evening, 4-H members and volunteers arrived and began setting up the animal pens for the
projects in the main barn of the fairgrounds.

Last year’s fair was canceled due to the COVID-19 pandemic and the fair will be hosting its first full slate of events since 2019.

The Lawrence County Extension Office has already released the full schedule for the Junior Fair events, consisting of 4-H and FFA competitions, and Collier said the Senior Fair schedule, which is comprised of entertainment, grandstand attractions, rides and derbies, will be released shortly.

Collier said they now have entertainment booked for each night, with wrestling for the Wednesday of fair week now filling what was the final open slot in the schedule.

The 2021 Lawrence County fair kicks off on Saturday, July 10 at the fairgrounds, located at 775 County Road 107 in Rome Township.

The parade and opening ceremonies will take place on Sunday, July 11, followed by several days of 4-H competitions, with the closing auctions set for Saturday, July 17.

COLUMBUS — An elderly woman at a patient care facility in Kent, was having trouble installing her dentures when patient-care... read more