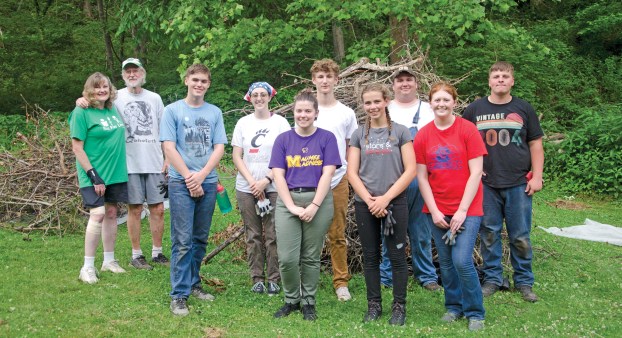 A group of teens, part of a mission group from Maumee United Methodist Church, located in Maumee, Ohio, worked on Monday to clear the property of Robert and Robin Hutton, at left, of damage from February’s winter storms. (The Ironton Tribune | Heath Harrison) 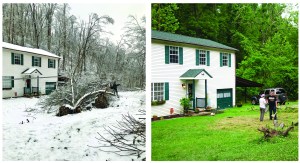 RIGHT: The yard of Robert and Robin Hutton, in front of the Hutton Wayfarer Gallery, after a mission group cleared it on Monday of damage from February’s winter storms. LEFT: Two apple trees were uprooted on the property after a winter storm. (The Ironton Tribune | Heath Harrison)

Mission group assists those in need with Lawrence County projects

SOUTH POINT — With the sweltering temperatures and humidity earlier this week, it is hard to believe that, just four months ago, Lawrence County was essentially shut down by a series of three winter storms that moved into the region.

Hitting in February, they downed trees across the county, left thousands without power, left roads impassable and damaged homes and buildings.

Among those receiving the brunt of the storm were Robert and Robin Hutton, who live on Charlie Creek Road, just outside the village limits of South Point.

In addition to their home, the couple owns the Hutton Wayfarer Gallery on the property, which showcases the artwork of Robert, who taught fine arts at Marshall University for three decades, as well as shows by guest artists.

“The winter storm on Feb. 15 was a disaster for us,” Hutton, 82, said. “We had a half inch of ice, as everyone did, and trees were popping and falling all night.”

He said, like many, they received the worst from the second of the storms, which left about 15 trees down on their property, some falling on and damaging buildings, including their garage and studio.

Tall pines across the road from them also fell on their property, while the yard was covered and their driveway blocked.

Their road was one of the hardest hit in the county, so much so, that it was one that Gov. Mike DeWine toured when he visited the county to assess storm damage.

The Huttons set to work clearing their property, and turned to the number the county had set up for help.

A volunteer crew came by in March, offering to help with some of the worst damage, though Robert said, at the time, there were others in immediate need so the workers moved on to different sites.

The Huttons continued working into the spring, when they got a call from Mike Boster, who heads Lawrence County Emergency Management Services. He asked if they still needed assistance with the damage. They were told that a mission group would be in the area.

“It was the answer to many prayers when he called to ask if we still needed help,” Robin said. 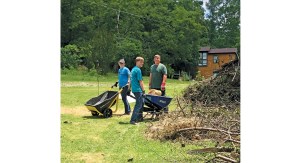 Teens from a mission crew from Maumee United Methodist Church remove logs and debris from February’s winter storms on the property of Robert and Robin Hutton, located on Charlie Creek Road in South Point, on Thursday. (Submitted photo)

And, on Monday, the help arrived, in the form of six teens and two adults from a mission project with Maumee United Methodist Church, located in the Toledo area.

Housed and fed at New Hope United Methodist Church in Proctorville, they were part of a larger group of 14 who were in the county.

The group was referred to Boster by Mike Corn, who has been mission coordinator for Lawrence County for 20 years. Working with the Rev. Bob Davis, a 40-year veteran of Jackson Area Ministries, they steer groups to those in need in the region.

“We’re here, removing brush and stacking the large pieces,” Zaq Phillips, youth minister with the group said on Monday afternoon. They had been there working all day.

He said they had two projects, helping to clear the Huttons’ property, as well as building a 56-foot wheelchair ramp for a home in Hanging Rock.

Corn said, at that point, the ramp project involved mostly digging postholes, so they were able to pull a number of people away to help the Huttons.

“There really wasn’t a lot to do then,” he said of the Hanging Rock project.

Phillips said this is his fourth year on a mission project to Appalachia, while others in the group were on their first and second years.

He said the church has been taking part in the projects for about 10 years. 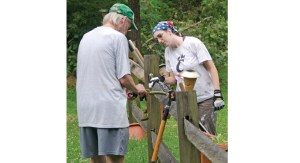 Robert Hutton and Maddie Harris, a member of a mission group from Maumee United Methodist Church, thread a weedeater during work on his Charlie Creek Road property on Monday. (The Ironton Tribune | Heath Harrison)

Phillips joked that when they first heard what the two projects would be, he said they wanted to work slower on building the ramp, dreading the task of stacking wood.

But he said, upon meeting the Huttons, it turned out to be “the best part of the trip.”

“Being with Robert and Robin has been a wonderful experience,” he said.

They received a tour of the gallery and were given cards from the Gospel painting series of acrylic works depicting the life of Christ. Hutton, who served five years as a lay brother with the Catholic missionary order, Society of the Divine Word, has additional religious works in the gallery’s collection.

The couple said they were elated to have the mission group.

“They’ve been wonderful,” Robin said. “And I feel like I’ve known them my whole life.” 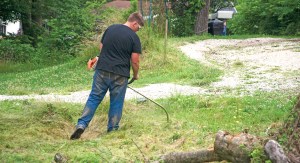 She said they came back Wednesday for a bonfire celebration with s’mores, treats, cornhole and badmiton as thank you for their two days of work. The group put in a second day at the property on Thursday.

“There was just so much to do,” Robin said, stating they were both extremely grateful. “It is amazing what these young people have accomplished. We are very, very appreciative.”

The Hutton Wayfarer gallery, which had minimal damage in the storm, typically hosts public art events, but has been closed due to the COVID-19 pandemic and further hampered by the storm damage. Robin said they hope to resume events in the near future as things clear up.

She said they were also thankful to Davis, Corn and Boster for connecting them with the group. 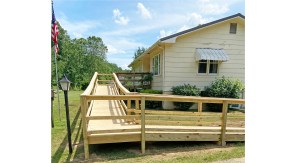 A mission crew from Maumee United Methodist Church constructed this wheelchair ramp at a home in Hanging Rock as part of their visit to Lawrence County this week. (Submitted photo)

Corn said the mission groups have taken on one additional project in the county.

Next week, a different youth group will be helping to redesign a bathroom to make it accessible for a person who was disabled after receiving a brain injury in an ATV accident.

“They are always good groups,” Corn said of the volunteers. “They’re always willing to help.”

He said they take on projects that are referred to them by local agencies and that those who are in need of the summer volunteers can contact Jackson Area Ministries at 740-286-1320.

“We’ll put them on the list and try, if we can’t make it this summer, we’ll do it next summer,” he said.