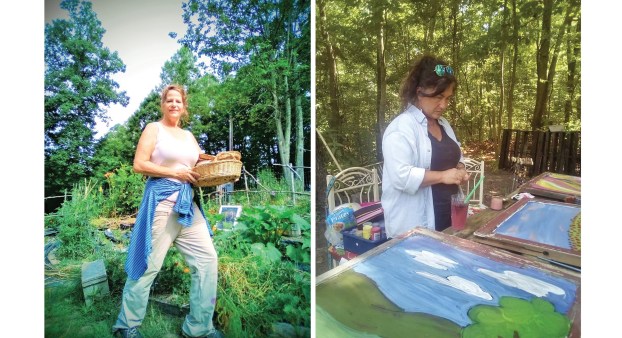 HEALTHY LIVING: In touch with the earth

WATERLOO — Since 2013, Wild Ginger’s Homestead, has been offering organically-grown herbs and plants and foraged food products.

Owner Chaille Shaw said when she retired from law enforcement, she was diagnosed with post traumatic stress disorder and she found that herbal remedies helped her with her symptoms.

Shaw, who studied horticulture, plant taxonomy and art, saw a good fit for her knowledge.

Not wanting to use pharmaceutical drugs, she decided to go a natural route.

“I knew there had to be a better way,” she said.

One of those she chose to grow was passion flower, native to Ohio, and a vine with an edible fruit. It has been used in folk medicine to treat stress and anxiety.

Another is valerian, a flowering plant, native to Europe and Asia, known for its calming effects. She began selling and giving away the excess of what she grew.

“And, from there, it became a beautiful garden of herbs,” Shaw said of the business, which is located on Forest Ridge Road in Waterloo.

While Wild Ginger’s does not have a brick and mortar location, she runs things through Facebook, which she updates regularly with posts on the homestead.

For instance, recent ones have shown a plentiful crop of gooseberries and organic cherries.

Shaw said those interested in her products can message her on Facebook, and she will travel to them.

“I will meet them in any direction,” she said.

She follows the philosophy of permaculture, an ecologically harmonious approach to growing, which uses the existing topography of the land.

She said this promotes good stewardship of the land, minimizes a carbon footprint and is more sustainable.

“And it reduces the workload,” she said.

Shaw also specializes in foraging and, in addition to selling products found in the wild, she works to educate people on the subject.

“I’ll come to anyone’s house to teach foraging,” she said.

With the COVID-19 pandemic subsiding, Shaw said she plans to attend more events and sell her wares at local farmers markets, as well as get her products into small stores and specialty shops.

She said one of those will be the Wild Ramp, a year-round farmers and food market located on Huntington’s west end.

For the past few years, Shaw has also organized communitywide scavenger and treasure hunts, activities that had two aims: to give families something to do during the pandemic and to promote businesses out in the county. Those taking part followed clues and drove to different stops on the hunt, with the winner receiving a prize basket of items from local businesses.

The proceeds of these events went to charity, with donations made to veterans groups and Backpack Buddies. Later this year, Shaw said she plans to host another event, with the donation going to Collins Career Technical Center student who was assaulted and injured in Huntington earlier this month.

From dealing with PTSD to finding remedies, Shaw said she hopes her experience, work and research in the field can help others.

“It promotes healing and I hope to be an inspiration to other women,” she said.

For more on Wild Ginger’s Homestead, visit their Facebook page at https://www.facebook.com/oldforestridge.