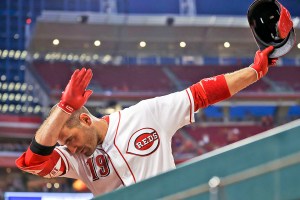 Taking a page from hip hop dancing, Cincinnati’s Joey Votto is dabbing to the cheering crowd after hitting a solo home run and getting his 1,000th career run batted in. The Reds lost to San Diego 7-5 in a rain-shortened five-inning game on Wednesday. (Aaron Doster/AP/Courtesy of the CincinnatiReds.com)

CINCINNATI (AP) — Trent Grisham hit a grand slam and a solo shot and the San Diego Padres rallied for their 11th win in the last 12 games, beating the Cincinnati Reds 7-5 on Wednesday night in a game called in the sixth inning due to rain.
Grisham’s first career grand slam in the fifth inning came off reliever Josh Osich and gave San Diego the lead and its sixth straight win over Cincinnati in the past two weeks.
“A lot of resilience by the guys tonight,” Grisham said.
The game was stopped with one out in the Padres’ half of the sixth amid a thunderstorm. It was declared official after a 93-minute delay.
Grisham and Wil Myers hit back-to-back solos shots in the Padres’ second. Fernando Tatis Jr. hit his National League-leading 26th homer leading off the third.
Nick Castellanos, second in All-Star voting among National League outfielders, hit a three-run homer as part of the Reds’ four-run first inning.
Joey Votto homered to right leading off the third inning — the 1,000 RBI of his career — but the Reds bullpen, the worst in the majors, promptly blew the 5-3 lead.
Osich relieved Reds starter Vladimir Gutierrez (3-3) with one out and the bases full in the fifth. Reds manager David Bell said he chose the left-handed Osich especially to face the left-handed hitting Grisham, but it backfired when the Padres center fielder lined a slider into the right-field seats.
“He put a good swing on a two-strike pitch,” Padres manager Jayce Tingler said. “I thought it was in the gap at first, and it kept carrying.”
Joe Musgrove (5-6) was the winning pitcher, despite allowing five runs and four hits through four innings.
Musgrove, who pitched seven scoreless innings against the Reds in a no-decision on June 17, settled down after the rough first, allowing only a walk and Votto’s homer in the next three innings.
“He’s been an absolute warrior for us,” Tingler said. “Tonight, to give up the runs early, he kept his hands up and kept fighting. He didn’t have his best stuff.
Reds manager David Bell lamented the shortened game.
“For sure it’s disappointing,” he said. “You can’t do anything about the weather, but the way the game was going, we would have had opportunities to get back into it.”
GOOD COMPANY
Votto’s homer put him among legends Johnny Bench (1,376), Tony Perez (1,192), Pete Rose (1,036) and Frank Robinson (1,009) as the the only Reds players in modern history with 1,000 RBIs.
NO GENO
Reds third-baseman Eugenio Suarez got the night off after striking out four times against four different Padres pitchers in the 5-4 loss Tuesday night. The Reds were depending on the veteran to provide some consistency in the cleanup spot this season, but he’s hitting just .173. He does have 16 homers, which is second on the Reds, and 44 RBIs. Rookie Alejo Lopez, who made his major league debut Monday, started in his place of Suarez. “Just giving him a breather,” Bell said. “No more than that.”
TRAINERS ROOM
Padres: Left-hander Blake Snell, who was scratched from his scheduled start Tuesday night because of stomach issues, was feeling “slightly better” and is day to day, according to manager Jayce Tingler.
Reds: CF Tyler Naquin missed a third game with a sore right wrist. Manager David Bell said he’s expected to be back Thursday. … OF Max Shrock (left calf strain) and RHP Jeff Hoffman (right shoulder) are doing rehab stints at Louisville.