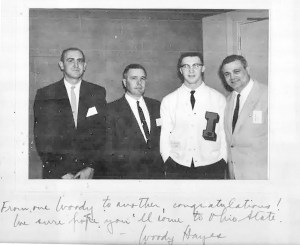 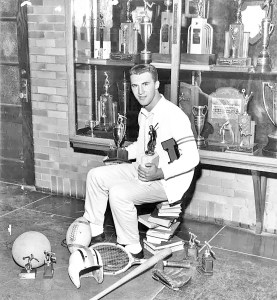 Woody Hall was an all-around athlete at Ironton 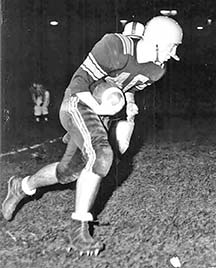 Woody Hall was heavily recruited including by then-Kentucky head coach Blanton Collier who actually drove his car with the window down and talking to Hall as he and his date were leaving a movie at the Paramount Theater.

It took one Woody to get another Woody.
Thanks to the recruiting efforts of the late, great Ohio State football coach Woody Hayes, the Buckeyes were able to land an outstanding Ironton Fighting Tigers player named William “Woody” Hall.
Hayes was dozens of college coaches trying to sign the 1960 All-Ohio standout running back and defensive end.
Hall started at right halfback as a freshman and then shifted to the more dominant left half position as a sophomore.
With some talented halfbacks, the bigger, stronger Hall shifted to fullback for his junior and senior seasons.
Not only was Hall bigger than the halfbacks, he was also extremely fast. Hall ran the 100-yard dash in 10.4 seconds at the state meet or the equivalent of 11.2 seconds in the 100 meters.
Hall was named to the Class AA All-Ohio first team. During his era, Ohio only had two classifications with AA the larger schools and the class with the most schools making it extremely difficult to make any team, let alone first team.
Hall played in the North/South All-Star Game back when there were just two teams. Hall, Coal Grove’s John Bill Deeds and Ironton head coach Charlie Kautz were all part of the game.
Hall scored the South’s only touchdown on a 10-yard run through the teeth of the North defense in an 18-8 loss.
Hall signed with the Ohio State Buckeyes. He received more than 40 offers that included:
Ohio State, Wisconsin, Marshall, Miami of Ohio, Miami, Fla., Wake Forest, Alabama, Southern Cal, Indiana, Duke, Pittsburgh, The Citadel, Kentucky, Michigan State, Tennessee, Army, Iowa State, Florida State, Cincinnati, Nebraska and several smaller colleges.
Hall played fullback on the Ohio State freshman team. At that time, freshmen were not allowed to play varsity.
However, an injury to his shoulder early in his sophomore season forced Hall to move to another position as a defensive end, a position Hall played in high school.
Players were not as big during the era as well. At 6-foot-1, 205 pounds, Hall was one of the largest players for the Buckeyes. Ohio State’s three largest linemen in 1963 were 230, 232 and 233 pounds. Proctorville junior Bernie Stanley was a 6-foot, 230-pound offensive tackle that season.
As a junior, Hall led Ironton in rushing with 871 yards on 128 carries for a 6.8 yards per carry average.
As a basketball player for Ironton, Hall was an inside player who was physical and rebounded as part of Ironton’s first district basketball championship team in 1959.
Ironton upset Chillicothe 66-54 as Ronnie Kratzenberg scored 23 points, Bob Clay 20 and Dick Plymale 13.