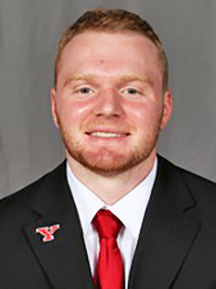 Just like Bachman-Turner Overdrive sang, “C’mon and take a free ride.”
Gage Salyers took a free ride and it earned him a lot of mileage with the Youngstown State Penguins’ coaching staff.
Youngstown State did not play last fall but did play a spring schedule that did not count against the eligibility of the players.
The “extra season” proved valuable to the former Ironton All-Ohio quarterback and defensive back who help the Fighting Tigers’ to a Division 5 state runner-up in 2019.
The 5-foot-11, 195-pound Salyers was able to get in some needed experience and work in his freshman season that upgraded his position on the depth chart with the Penguins’ coaching staff.
“This was like a free year. It helped. I feel like I can get on the field more this year,” said Salyers.
Getting an abbreviated schedule helped Salyers adjust from high school to the college level.
“The biggest (adjustment) I’d say was covering the wide receiver. You don’t get to see that kind of speed around here,” said Salyers.
Although Salyers played some cornerback, he is being considered for the strong safety position due to his size, strength and aggressive style of play that fits well into the YSU defensive scheme.
“Our defense is set up where we’re coming down and filling. We’re taking on offensive linemen. I kind of like taking them on,” said Salyers.
“I go for their legs and take them out. I learned it from one of our senior safeties Zaire Jones. He transferred from Vanderbilt. I learned a lot of him.”
Cornerbacks’ coach and former Ohio State standout Ashton Youboty has been impressed with Salyers and has pushed for him to get some playing time.
“He’s a good coach. We just call him Coach Y,” said Salyers.
Even though Salyers is on the defensive side, he still caught the eye of former Ohio State and NFL quarterback Mike Tomzak is not only an advisor to head coach Doug Phillips but also helps with the quarterbacks.
“Every Friday is a Fun Friday to relax everyone before get on the plane. We play games and stuff,” said Salyers. “We were playing a throwing game and he noticed it. He said ‘Didn’t you used to play quarterback? I’ll have to get the film out on you.’”
If Salyers is given a chance to play quarterback, he said he would prefer to play defense but it would be tempting to possibly do both.
“If I’d rotate in at defensive back, but I’d play quarterback if they could work it out,” said Salyers. “One week I was going to be the scout team quarterback but I was up with the ones and twos in pairings (with defensive backs).”
As for this fall, Salyers said the Penguins could be a surprise team.
“I think we’ll be pretty good. At one point, we had 11 true freshmen and redshirt freshmen playing and that’s just on defense. We only had one returning offensive lineman who had actually played,” he said.
The Penguins open the season on Thursday, Sept. 2, at home against Incarnate Word before playing a noon game on Saturday, Sept. 11, at Michigan State.