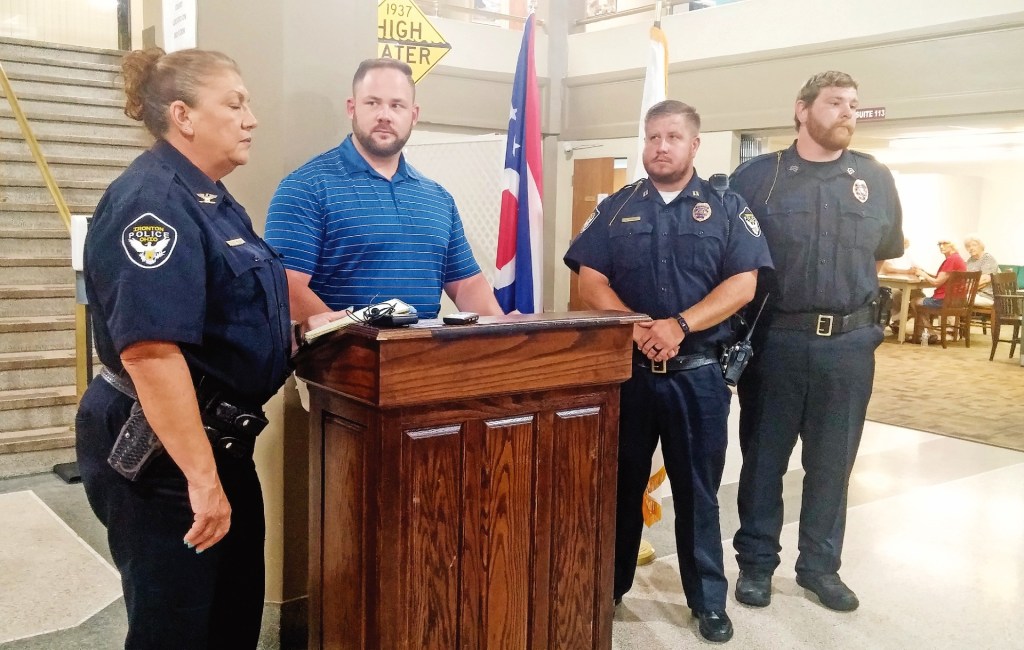 On Wednesday, members Ironton Police Department gathered in the lobby of the Ironton City Center to see the promotion of two officers, Steve Wilson and Bradley Spoljaric.

“We are really proud of officers,” said IPD Chief Pam Wagner to the assembled officers and family members.

The first to be promoted was Wilson who is now a captain.

“He has taken several courses to continue his training and education, moving up through the ranks and is a member of good standing,” she said. “We want to say congratulations to you.”

Wilson was then sworn in as captain by Ironton Mayor Sam Cramblit.

Wilson said that he has spent the past 15 years as a police officer because of “love for my community and to serve my community, to make it better. I appreciate the opportunity and look forward to being a captain.”

Wilson will serve as the captain on the evening shift.

Next, Spoljaric was promoted to sergeant during Wednesday’s ceremony, came to the IPD last year.

“You should be good at this now, with two swearing-ins in one year,” joked Cramblit.

Before coming to the IPD, Spoljaric was a member of the Lawrence County Sheriff’s Office, a security guard at Cabell-Huntington Hospital, was security for Lawrence County Common Pleas Court Judge Charles Cooper and began his career as a probation officer for Ironton Municipal Court Judge Clark Collins.

He said he does the job for the community and for those closest to him.