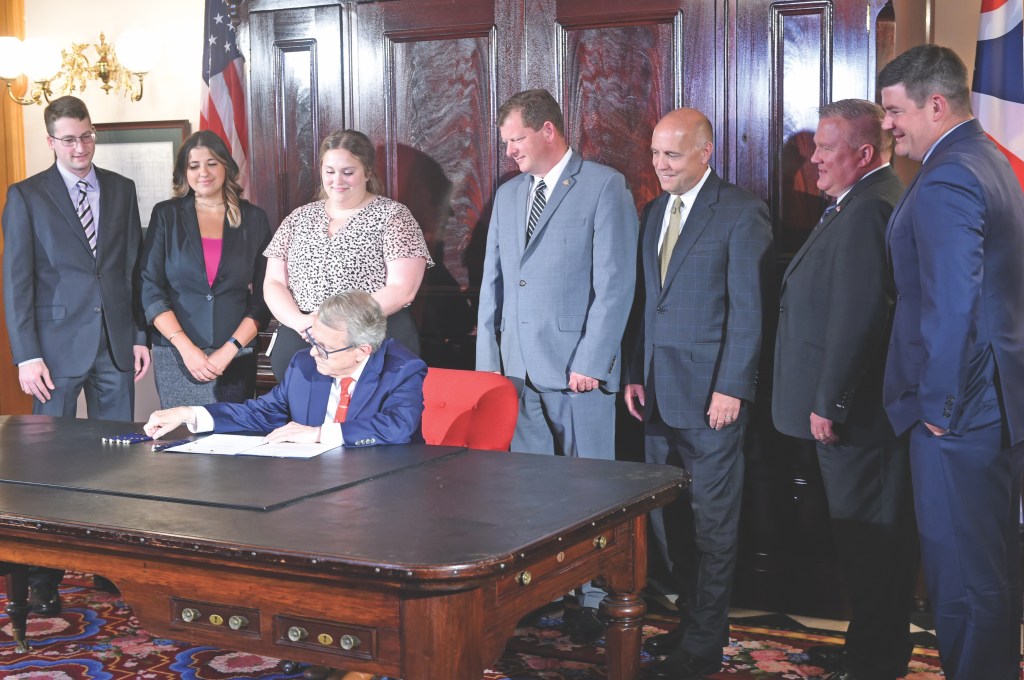 State Rep. Jason Stephens, R-Kitts Hill, looks on as Gov. Mike DeWine signs the bill he sponsored into law in Columbus on Thursday. House Bill 201 prevents local governments from limiting the use of natural gas and propane. (Photo submitted)

COLUMBUS — State Rep. Jason Stephens, R-Kitts Hill announced on Thursday that his sponsored legislation under House Bill 201 has been signed into law by the governor.

The legislation prevents local governments from limiting the use of natural gas and propane. Stephens attended the signing ceremony on Thursday.

“Here in Ohio, we want to promote a fair market for all Ohioans, consumers, to have energy options that work best for them —this legislation helps make that a reality,” Stephens said. “With this bill, I’m ensuring my constituents, all Ohioans and businesses have accessibility within their communities to the abundancy of natural gas that our great state has preserved.”

He said House Bill 201 helps safeguard the economy throughout Ohio and maintains those individuals who currently have natural gas will be able to maintain that service now and into the future. Additionally, the legislation also supports propane access throughout the state.

Stephens believes every local community in Ohio should welcome the economic and environmental benefits that natural gas and propane provides for their citizens and businesses.

The legislation has over 50 cosponsors in both the House and Senate, including bipartisan support in the House vote. During the committee process, the bill also had over a dozen proponent testimonies from organizations and citizens alike.

This legislation will take effect in 90 days.