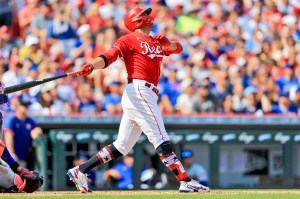 CINCINNATI (AP) — Cincinnati Reds relievers are on a roll at the expense of the reeling Chicago Cubs.
The beleaguered Reds bullpen, which has seen more bad days than good this season, hamstrung the Cubs for the second straight day, allowing just two hits over the last four innings in a 3-2 win on Saturday — the eighth straight loss for Chicago.
On Friday night, five relievers shut out the Cubs over the last four innings in 2-1 win for the Reds. Heath Hembree threw a scoreless ninth in both games.
It’s been a confidence booster for that bullpen, which has the second-worst ERA in the majors and is without key members Tejay Antone and Lucas Sims due to injuries.
“Each one of them just did their job and did it really well,” Reds manager David Bell said. “Every one of them. Its been going on for a while. They’ve been doing a really good job and getting better and better.”
Joey Votto and Tyler Naquin homered Saturday and the slumping Eugenio Suárez drove in the decisive run with a single in the seventh inning as the Reds hopped over the Cubs into second place in the NL Central, behind the Milwaukee Brewers.
Tyler Mahle allowed two runs and five hits and struck out seven over five innings for the Reds. Ryan Hendrix (4-1), who pitched the seventh inning, got the win.
Adbert Alzolay (4-8) gave up three runs and five hits in seven innings for the Cubs.
Mahle pitched out of a bases-loaded jam in the first. Rafael Ortego scored on a passed ball in the second, and Kris Bryant homered in the third for a 2-0 lead.
Votto homered to center field with two out in the fourth, and Naquin tied the game with a booming shot into the right-field seats leading off the fifth.
In the Reds seventh, Suárez, who was hitting .174, drove in Votto with a looping single to right.
“I hit it off the end of the bat a little bit, but it was enough,” Suárez said.
The Cubs haven’t won a game since throwing a combined no-hitter against the Dodgers to open the current 10-game road trip on June 24.
“… As fast as it went south, it can turn around,” Bryant said. “It’s insane. You have to forget things, good or bad. We have another game in 12 hours.”
RALLY KILLER
Struggling Chicago right fielder Justin Heyward let some prime RBI chances slip away. He struck out with the bases loaded to end the Cubs first, grounded out with a runner on to end the third, and went down swinging again with two on and two outs in the fifth. With his average slipping to .193, he was lifted for pinch hitter Jake Marisnick, who struck out. The Cubs stranded a total of nine runners.
VOTTO POWER
Votto had two hits Saturday, including the long homer to center, and scored twice after driving in both Reds runs with a double on Friday night. The 37-year-old first baseman also made the defensive play of the game Saturday. With a runner on first and one out in the Cubs seventh, Votto jumped up to snag a hard hopper from Anthony Rizzo and started a sparkling 3-6-3 double play.
TRAINERS ROOM
Cubs: 2B Nico Hoerner is back with the team and is expected to be activated. Horner (left hamstring) has been on the injured list since May 26.
Reds: Right-handed reliever Michael Feliz (right elbow sprain) was sent to Triple-A Louisville for a rehab assignment, where RHP Jeff Hoffman (right shoulder soreness) made his third rehab appearance on Friday. Feliz and RHP Michael Lorenzen (right shoulder strain), who is rehabbing in Arizona, could be back with the Reds around the All-Star break.