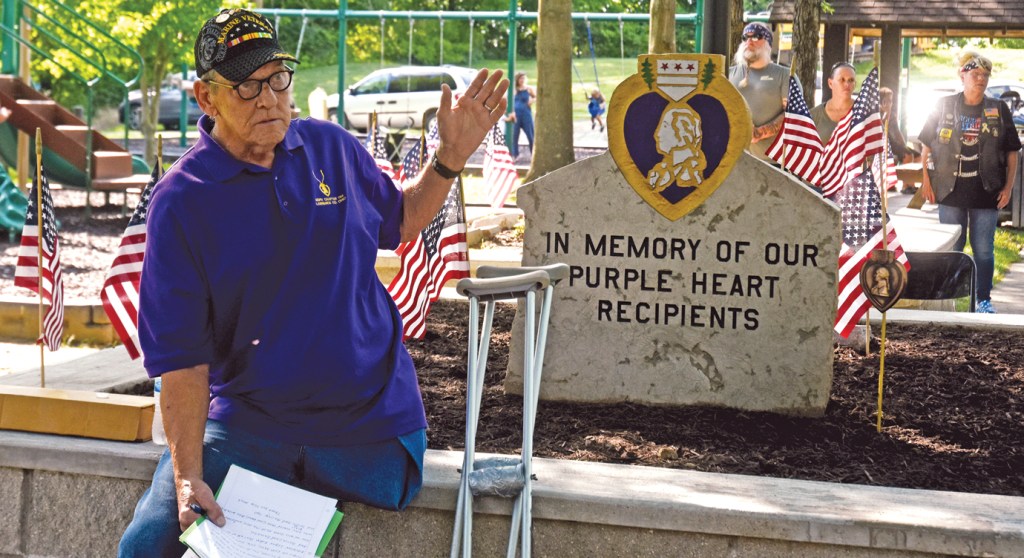 Charlie Meadows, a Vietnam-era U.S. Marine veteran and long-time member of the Order of Purple Heart, speaks on Saturday at Paul Porter Park in Coal Grove at the opening ceremony of the park’s new monument to the village’s Purple Heart recipients. (The Ironton Tribune | Mark Shaffer) 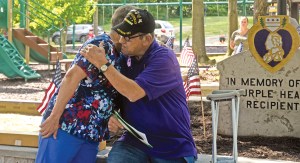 Brenda Schwab is hugged by Charlie Meadows on Saturday at Paul Porter Park in Coal Grove at the opening ceremony of the park’s new monument to the village’s Purple Heart recipients. Her first husband, Curtis Crum, was killed in Vietnam in 1986 and has a marker honoring him at the monument. (The Ironton Tribune | Mark Shaffer)

Centerpiece is at Paul Porter Park in Coal Grove

COAL GROVE — It took 53 years, but Brenda finally got a monument in memory of her first husband, Curtis Crum, who was killed in action in Vietnam in 1968, at a ceremony on Saturday at Paul Porter Park in Coal Grove.

Brenda and Curtis had dated for four years and got married on April 6, 1968. In May, Curtis was drafted into the U.S. Army and ,in October 1968, he was sent to Vietnam.

She later married David Schwab. The memory of Curtis remained for her and a few others, but was lost to the town he grew up in. His memory may have faded, but she worked to make sure he and his sacrifice weren’t forgotten, since he was never honored.

“I talked to people and I talked to people, never got anywhere. I said I would fight until the day I die,” she said. She is happy to finally see something in his honor. “It has been 53 years of waiting for it.”

She said she was giving the honor to all those involved in making it happen.

“They are the ones that made it happen,” she said. “I can’t even explain how I feel, it just overwhelms my heart.”

The monument came this summer because of renovations at Paul Porter Park.

Earlier this summer, Coal Grove Mayor Gary Sherman and his brother, Jay, who is on the village council and the president of the Coal Grove Betterment Club, were at Paul Porter Park looking over the recent improvements.

Among them was that old wooden flower boxes had been replaced by concrete ones and the brothers wanted to replace the old rusting flag pole with a nicer one.

They had an idea of making the new flower boxes into something to honor those who served in the military, but didn’t have a specific design in mind.

Then they ran into Charlie Meadows, a Vietnam-era U.S. Marine veteran and long-time member of the Order of Purple Heart, an organization for those who had received a

Purple Heart for being wounded during battle. As he told them his story, inspiration hit.

“I looked at Gary and said ‘Well, we know what it going in that flower box,’” Jay Sherman said. “This is an honor for us to do. It really is.”

Crum was chosen since he was a Purple Heart recipient and was killed in action.

At 5 p.m. on Saturday, they unveiled the new Purple Heart display next to the playground in Paul Porter Park. The monument, with a Purple Heart medal design on it, was made by Buckeye Monument in Ironton. A new flag pole displays both the American Flag and a Purple Heart flag. On the opposite side of the Purple Heart stone, there is a marker commemorating Crum.

Meadows spoke at the dedication. He started by thanking the Coal Grove Village Council, which voted unanimously to fund the display.

Meadows carried a box with two Purple Heart markers and had Jay and Gary Sherman put them in the display in honor of two other Coal Grove Purple Heart recipients, John Russell and Justin Allen.

Meadows was in the Vietnam War as a machine gunner with the First Division of the U.S. Marines. He lost his left leg when an artillery shell landed near him in June 1968 in Khe San.

He said he and Crum grew up across the street from each other.

“We did all the things two ornery boys would do growing up,” he said.

Meadows said that he and Brenda, whom he called “like a sister to him” to him and his wife and that when he visited Brenda and David Schwab’s home, there was still Curtis Crum’s memorabilia in the house.

Meadows said he made a promise to himself that he would get something in Coal Grove to honor Curtis Crum and faced many hurdles over the years.

“It touches my heart deeply to see this,” he said of the monument.

Mayor Sherman said that the Purple Heart monument will continue to grow.

Meadows said they are trying to figure out how many Purple Heart recipients lived in Coal Grove. He knows of five, but wonders if there are more.

He said that the military lists recipients by the county they reside in, not specific towns.