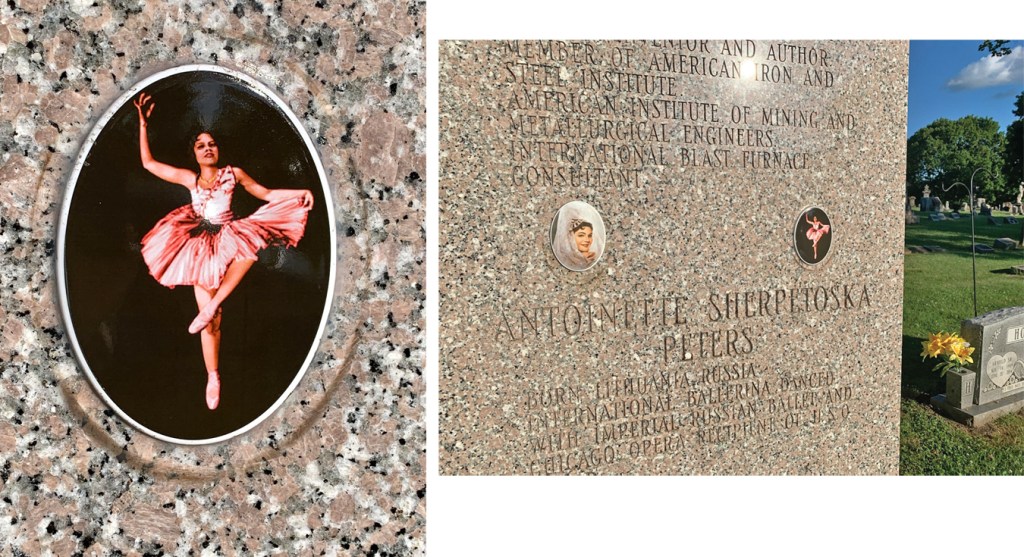 The new portrait of Antoinette Sherpotoska Peters was installed at her mausoleum at Woodland Cemetery in the past month. It follows the appearance of another portrait, a headshot, left, that appeared on the grave in May. Both are replacements of portraits that were originally on the mausoleum, but had been damaged by vandals. (The Ironton Tribune | Heath Harrison)

Both had been missing from ballerina’s grave for several years

Those visiting Woodland Cemetery these past few days may have noticed that one of the most-visited graves on the grounds has been gradually restored to its appearance from years past.

The mausoleum of Antoinette Sherpetoska Peters, who was a dancer with the Imperial Russian Ballet, is situated not too far from the entrance to the cemetery.

It is a regular stop each year on the Lawrence County Museum’s Historic Cemetery Walk, though many have been dismayed over the last several years because of vandalism that has taken place, with two portraits of the dancer damaged and having gone missing.

Though that seems to have been remedied recently, thanks to the work of an unknown benefactor.

Peters was born in Lithuania in 1894, when it was part of the Russian empire under its final, ill-fated tsar, Nicholas II.

She performed for the monarch as a young girl, and her family moved to the United States, not long before the Romanov Dynasty ended.

After the family moved to Chicago, she married James F. Peters, a native of the Ironton area and a prominent figure in the iron industry. The couple split their time between Chicago and Florida and Mrs. Peters established a ballet school.

After her husband’s retirement, Mrs. Peters was killed in a head-on automobile accident at the age of 67.

Mr. Peters chose to have his wife interred at Woodland Cemetery in his hometown in the mausoleum, which bore the two portraits of her on its exterior.

The gravesite was struck by vandals over the years, being the site of a break-in at one point, while the portraits were shot and damaged by a BB gun, then disappeared altogether. For the last several years, the face of the mausoleum has remained bare.

However, in late May, The Ironton Tribune received two calls from visitors to Woodland, who had noticed that one of Peters’ portraits had suddenly reappeared.

A visit revealed that a copy of Peters’ headshot was now mounted on the mausoleum. The portrait had been installed sometime since the grave was photographed on April 20, possibly around Peters’ birth date on May 6. A large wreath of flowers was also on the mausoleum’s door.

The cemetery’s office said they were unaware that the portrait had been replaced and had not been contacted by anyone about the matter.

Yvonne Sinnot, who portrays Peters each year in the Cemetery Walk, said she also had not heard anything regarding the restoration.

The Lawrence County Museum was similarly surprised, with museum trustee Kay Rader stating she was unaware that it had been done and that she had no information regarding it.

“Maybe it was the spirit of Woodland Cemetery,” Rader said of the work.

And, recently, it appears the benefactor has struck again.

On Friday, The Ironton Tribune received an anonymous, handwritten letter in the mail, with the return address listed simply as “Woodland Spirits.”

The letter writer informed us that they had visited the cemetery, but that one detail of the story had become outdated: There were now two portraits on the grave.

“Maybe it had something to do with that Woodland spirit and the recent pink supermoon that lit up the dark night,” the writer concluded, but took no credit for the work.

Sure enough, a visit to the cemetery that afternoon turned up a second portrait, a colorized, full body photo of Peters, installed to the right of the previous portrait.

It was again news to the Woodland office, who had not yet noticed the change or heard from anyone. They said the grave is decorated from time to time, by locals, possibly distant family.

Rader again had heard no information on the matter, despite the letter writer choosing to use her phrasing as their namesake. She said she was eager to visit and see the portraits.

“I do think there is a spirit there,” she said of the cemetery. “You can feel it.”

Whether it was done by a relative, someone interested in local history or an admirer of Peters’ life, the restored gravesite will be ready for this fall when the museum hosts its annual cemetery walk.

The event draws hundreds to the grounds, where community members dress as some of the notables buried there, such as Peters, World War I aviator Col. William

The walk was canceled last year, due to the COVID-19 pandemic, but Rader said it will be making its return in October.

“We’ll definitely be having it this fall,” she said. “And it will be a big one.”