Fantastic feats at the fair 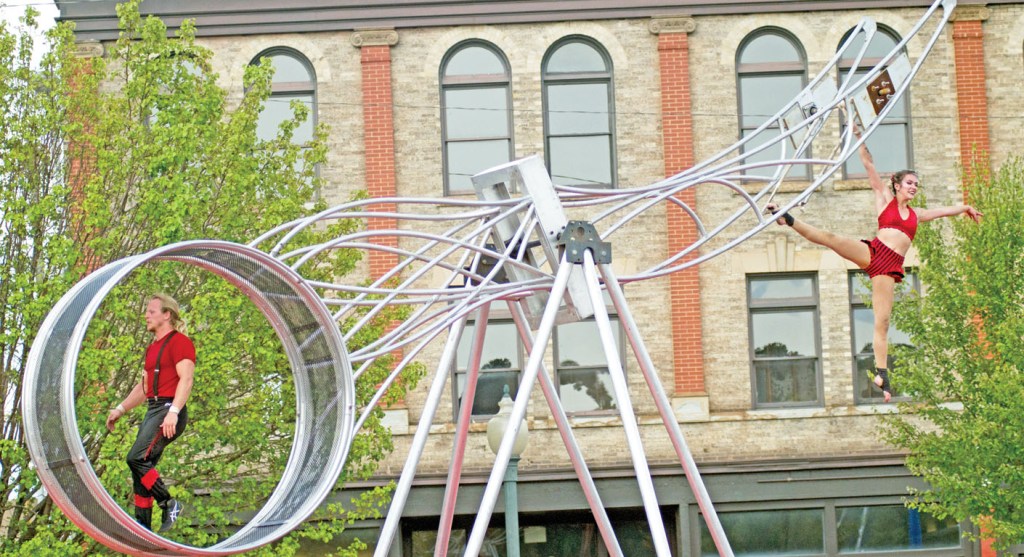 Shane Seese and Gia, of the Cincinnati Circus Company, perform on the “Wheel of Death” during the Ironton River Ride in 2019. The company is making a return visit to Lawrence County on Tuesday, performing two shows at the Lawrence County Fair as part of Family Fun Day. (The Ironton Tribune | Heath Harrison) 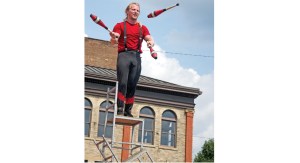 Shane Seese, from the Cincinnati Circus Company, juggles from high atop a stack of chairs during the Ironton River Ride in August 2019. (The Ironton Tribune | Heath Harrison)

But, on Tuesday, they are set to make their return, performing two shows at the county fair, at 6 p.m. and 7 p.m. in the grandstand, as part of Family Fun Day activities.

Jennifer Laubach, marketing director for the company, said the first will be the “big circus show,” which will feature knife throwing, aerialists, jugglers, magic and the “wheel of death,” a two-story, spinning piece of equipment, from which the aerialists will perform.

The later show will focus on the circus’s fire performers. 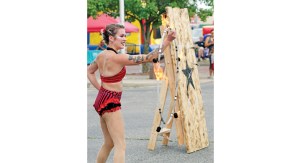 Gia Bolton, of the Cincinnati Circus Company, performs a fire act during the Ironton River Ride in 2019. (The Ironton Tribune | Heath Harrison)

Laubach said the Cincinnati Circus Company was formed 25 years ago by Dave Willacker.

“He was originally a juggler and was doing little shows and people started booking more events and he needed to hire others, which led to a full-on circus,” she said.

The company performs mostly in Ohio, but has traveled as far as New York, Canada and Texas to perform.

She said the company has about 15 people in its office, 20 for its delivery crew and about 150 performers, 60 of whom work full time, while others rotate in the line up.

Laubach said, to find talent, they often approach colleges and high schools, talking to gymnasts, those taking ballet and others.

“They do these types of things and they get to elevate it to a higher level,” she said.

She said they have also brought on people to teach circus skills, some of whom ended up staying with the company. 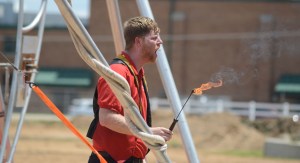 As is the case with many industries, the circus was impacted last year by the COVID-19 pandemic, with the types of crowd events they regularly visit curtailed.

She said, through 2020, they had to think hard on how to keep things going.

“We wanted to keep people safe,” she said of their approach.

One alternative was a drive-thru circus, like they did last summer for the Lawrence County, Kentucky public library system, where cars would drive past a series of performers. She said they also did several drive-in circus events, where the audience could park and watch the show.

“That way, they could socially distance and be far apart,” she said. 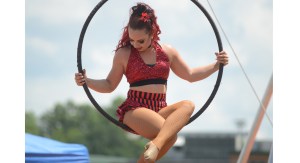 The Cincinnati Circus will perform on Tuesday at the Lawrence County Fair, as part of Family Fun Day. (The Ironton Tribune | File photo | Kayla Niece)

Laubach said the Cincinnati Circus Company’s acts consist solely of athletic performers and things such as the sideshow and magic show and that they do not use animal acts.

Tuesday’s show at the fair will be all ages and family friendly, she said.

Grandstand acts are included in the paid admission to the fair, which is $10 and $5 for those 65 and older. For Tuesday’s Family Fun events, children 12 and under are admitted for $5. There is no charge for those under two for all days. 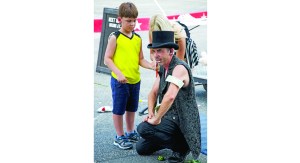 Dave Willacker, founder of the Cincinnati Circus Company, invites members of the crowd to staple dollar bills to him during the freak show portion of the their performance at the Ironton River Ride in August 2019. (The Ironton Tribune | Heath Harrison)