Carey overcomes serious back problems to golf for SSU

PORTSMOUTH — “When the going gets tough, the tough get going.”
That’s a phrase that has defined South Point native and SPHS High School graduate Emilee Carey throughout much of her life.
Despite serious problems with her back, Carey has maintained her competitive desire — and has often times been successful more often than not in doing so. 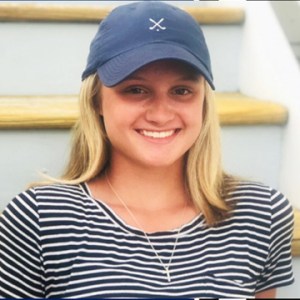 Thanks to an assist from Tri-State Junior Golf Tour Director Jason VanDeusen, the sophomore student at Shawnee State will return to the sport of golf for the 2021-22 academic year after taking a season off from the sport to focus on her studies and transition to college life.
“Coach (Dave) Hopkins and Shawnee State are the reasons that I decided to play,” Carey said.
“Shawnee State is amazing. I love the atmosphere. I didn’t play last year, and I regretted it. Getting the chance to play this season really means a lot to me, and I’m excited to play with the girls on the roster.”
For close to half of her life, Carey has dealt with scoliosis, or an irregular curve of the spine, as reported by the Huntington Herald-Dispatch as well as the Ironton Tribune.
The issue has caused Carey consistent troubles with her back, to the point where staying active helps Carey deal with the issue in an adequate manner physically, mentally and emotionally. In the past, Carey had to wear a back brace as much as 23 hours a day.
“It’s one of the hardest things that I’ve ever done, especially at that age,” Carey said. “I was so young. Having to keep my head up through all of it was really hard, but I’m glad that I did. Sports were what got me through it. If I didn’t have sports, I don’t know if I would’ve made it through.”
As much as sports have helped Carey, the maturity and mindset that the former Pointer has had through it all has been second-to-none.
That was on display at South Point High School, where Carey consistently helped the Pointers compete at a high level amongst their district foes.
Carey shot a 123 in a 2017 Division II Southeast Sectional Tournament and later missed her entire sophomore season of basketball due to a stress fracture suffered in her lower back, but recovered in a strong manner through her final two seasons of competition on the basketball court as well as the golf links.
As a junior, Carey improved drastically, shooting a 92 in a 2018 Division II Sectional Tournament to help the Pointers finish second overall in sectional play while earning one of the top three slots to advance to district competition.
Carey later finished 20th in the Division II Southeast District Tournament, then went on to be a starting guard for a basketball unit that posted a strong 18-8 overall record and advanced to the Division III District Semifinals.
In her senior year, Carey again placed fourth in the 2019 Division II Sectional Tournament, shooting another 92 to help lead the Pointers to a Division II Southeast Sectional Championship and another district berth.
Carey shot a 96 to place 14th while leading South Point to its best-ever finish at the Division II Southeast District level — a district runner-up showing. She then led South Point to another Division III District Semifinal appearance in basketball to cap off her athletic career with the Pointers.
“We had a great group of girls,” Carey said of her basketball and golf teammates.
“We had played together since the third grade, so we had great chemistry and we all got along. We all really miss those days. Being able to play with people that you know that you can get along with makes it so much easier. It was like a family. I was so excited to play.”
Now, with the help of VanDeusen — who informed Shawnee State head coach Dave Hopkins that Carey was interested in playing golf once again _ the college sophomore is back as an athlete as well.
“I had back surgery seven months ago, and right after I started playing golf, I knew that I wanted to play more,” Carey said.
“I’m glad that Coach Hopkins messaged me. If I don’t keep an active lifestyle, my back’s only going to get worse, so I figured that golf would be one of the best things to do.”
For Carey, Hopkins’ up-front personality and his kindness has always resonated with her — even when she was out of golf. When the sixth-year head coach at Shawnee State reached out to her about playing, she saw the opportunity as a natural fit.
Academically, Carey is certainly a fit — she will join the program with the second-best overall GPA of any returning SSU student on the roster.
“It’s meant a lot to me,” Carey said. “I met him during my senior year at a golf tournament. He talked to me a little bit then, and then began the process of recruiting me at that point. I decided not to play golf last year, but after thinking about it. It just feels right to play for him.
“He refereed one of my basketball games when I played at South Point, and I just kept thinking about how nice he was and how he handles himself. So when he messaged me about playing, it was like a sign from God. I felt like I had to take it. He was really nice. I’m excited to play for him.”
With the opportunity to play sports again, Carey isn’t taking anything for granted. She’s simply thrilled to represent the very school that she fell in love with coming out of high school.
“I’m just looking forward to making new friends, getting to know everybody and becoming a part of this team,” Carey said. “That’s a blessing in and of itself. Obviously, I want to get better, but I’m more worried about the team being better as a whole, and going as far as we can as a team.”