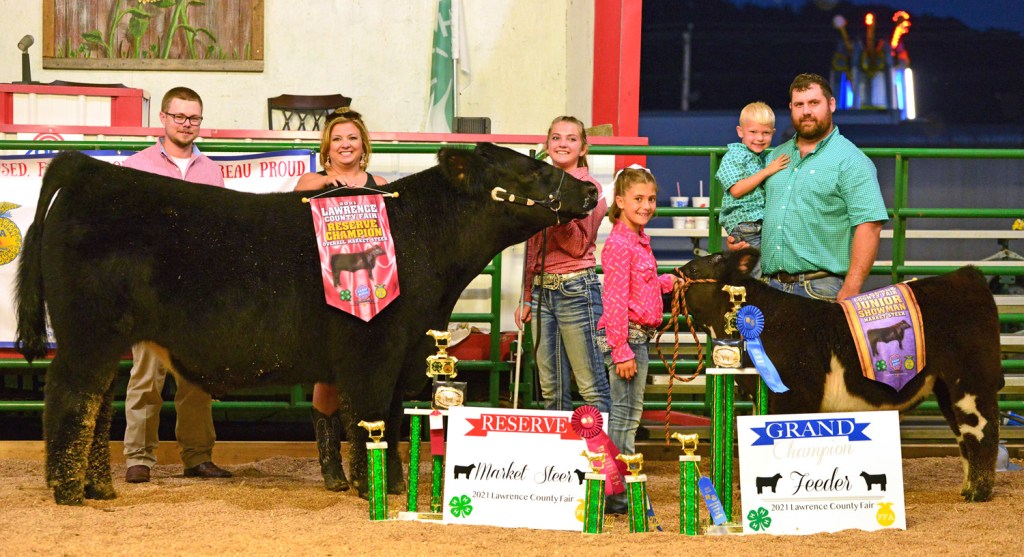 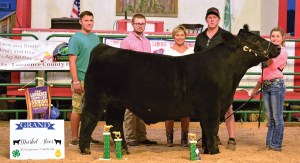 The beef shows on Wednesday had less participants that most years, mainly due to uncertainty that the pandemic would be mild enough to have a full Lawrence County Fair this year and the fact that it takes a year to raise cows for the shows and many don’t want to invest in a cow unless they know for sure there is going to be a fair.

But the show did go on.

The first show of the night was beef breeding.

Aniston Payne, 9, of the Starlight 4-H, was first in the first class and Colt Lambert, 11, of the Getaway Go-Getters 4-H, came in first in the second and third classes.

This was Payne’s first year showing and she was beyond happy to win.

“I’m feeling excited. This was my first year and worked with her really well. I even worked with my sister’s (Abigail’s) calf,” she said.

When it came time for the final breeding round, she was named the grand champion, much to her surprise.

“I am very surprised. Because we worked hard but still, sometimes Princess can try to run,” Payne said. “But mostly, she is the best because she is Princess.”

Lambert said he would have liked to see more competitors in his classes, but “I’m happy I won.”

“I feel pretty good about it,” she said. “I just like doing this and Stony is a good cow, too. They are easy to work with.”

She felt even better when she took grand champion later on.

“I was hoping I would get a grand champion, but I wasn’t really expecting it,” Fout said. “Especially since this is my first year. I’m so happy I can’t even say.”

In the senior feeder and beef breeding showmanship category, Abigail Payne, of Starlight 4-H club. took first place in first class. In showmanship, the person is judged on how they show and control their cow.

In the junior showmanship category, Fout won for a third time. Did she expect to?

Humphrey, of the Greasy Ridge Gang 4-H club, was happy to win with this being her first year showing.

“I’m surprised, excited and some other feelings,” she said. “I’m still processing it. I thought I was going to get last place because my steer has been acting up lately.” 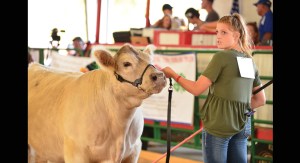 Gracie Daniels, of Over Yonder 4-H club, shows her animal in the market beef show at the Lawrence County fair on Thursday. She won first in her class in that competition. (The Ironton Tribune | Kayla Niece)

“It was pretty good,” said Daniels, adding she was a little nervous competing against her brother, Gunner. “But really, I wanted either one of us to win.”

Craft, of Symmes Valley FFA, was happy with her first place.

“I can breathe now,” she said, with a laugh.

“It was everything I could have hoped for,” Craft said.

“I was afraid I was going to come in last,” she said.