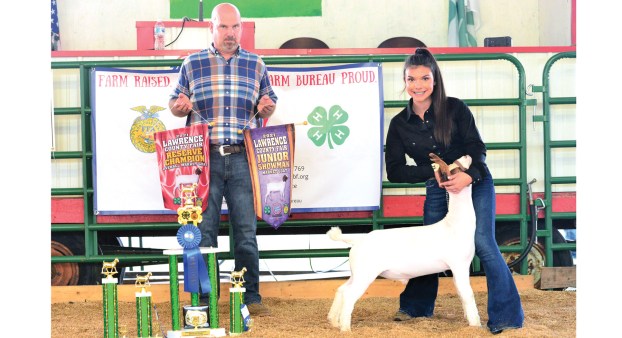 Isabella Kerns was reserve champion and junior showman in the 4-H and FFA market goat competition at the Lawrence County Fair on Monday. (Kayla Niece | For The Ironton Tribune)

Kerns, Daniels siblings do it again 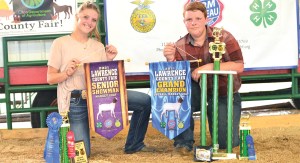 Gracie Daniels was senior showman and her brother, Gunnar Daniels, was grand champion in the 4-H and FFA market goat competition at the Lawrence County Fair on Monday. (Kayla Niece | For The Ironton Tribune)

ROME TOWNSHIP — The second day of goat competitions took place at the Lawrence County Fair and those who placed at the top were no strangers to winning.

The main barn hosted the market goat and showmanship event on Monday evening.

A six-year veteran of the fair, he is a member of Over Yonder 4-H club.

His sister, Gracie Daniels, who has shown animals at the fair for nine years, won senior showman and, like her brother, continued piling up the trophies.

On Sunday, she was reserve champion. At the last fair, in 2019, she was grand champion in market lambs. On Wednesday, she placed first in the second class in this year’s market beef show.

Another repeat winner this year was Isabella Kerns, who was reserve champion on Monday, as well as junior showman. She also won reserve champion at the 2019 fair, where she was also junior specialty goat showman.

Final day for the fair

The time has come. Today is the final day of the 2021 Lawrence County Fair. Here is the schedule for... read more