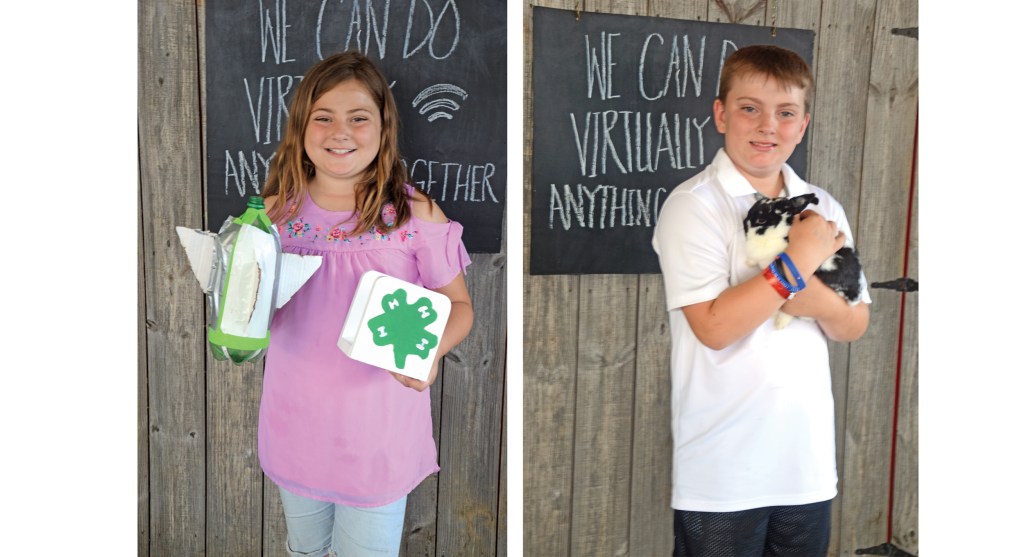 LEFT: Addison Newland shows both her rocket project and woodworking before the start of 4-H judging on Wednesday. RIGHT: Silas Newland holds the pet rabbit he raised as an animal science 4-H project on Wednesday. (The Ironton Tribune | Heath Harrison) 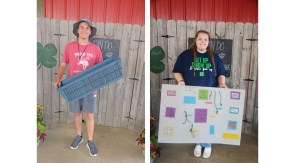 ROME TOWNSHIP — In addition to the many animal competitions that take place at the Lawrence County Fair, 4-H and FFA members also are judged on projects in a number of fields.

On Wednesday, the first of two days of judging for these took place, with natural resources, STEM and animal sciences projects. On Thursday, leadership and citizenship, creative and leisure arts, communication, workforce preparation, money management, healthy living, home life and self determined projects were judged.

Jennifer Besco, who serves on the 4-H committee and is the advisor for Barnbusters 4-H club, said those taking part ranged from age 8-18 years old.

She said the members receive a book and from there choose a project and category.

“It’s learning by doing,” she said.

One of those taking part was Elizabeth Ferguson, a member of Barnbusters.

He project was titled, “Not Just Knots” and featured different varieties of knots as examples.

“There are pretty basic ones, to secure things, and then some specialty ones for fishing,” she said.

Drew Fryer, who is on the Lawrence County Junior Fair Board, entered a project in the woodworking category, a planter.

“I like to build stuff from recycled wood,” he said of the piece, which was made using old house shutters.

Silas Newland, of Barnbusters 4-H club, entered a rabbit into the animal sciences.

He said the animal, which was a year and a half old, was an easy one to care for.

Newland said the main difference in doing a rabbit for animal science rather than the rabbit competition at the fair is that he gets to keep it and it isn’t auctioned off.

Addison Newland, another Barnbusters member, had two projects in for judging, one in the STEM category and one in woodworking.

The first was a rocket, constructed from a two-liter bottle, which would be launched using water pressure.

The second, a woodworking piece, was a napkin holder, which she had decorated with the 4-H logo.

Besco said winners are selected in each category and, depending on number of entries, a senior and junior winner are sometimes selected by age range, which is determined from 4-H age (based on the member’s age on Jan. 1 of each year).

She said there are other competitions and projects that take place.

For example, her son, formed a special interest club that does creative writing, while there are competitions in shooting sports and other disciplines.

Besco said that those who won in Wednesday’s competition could enter their project to sell in the silent auction at the fair at the end of the week.