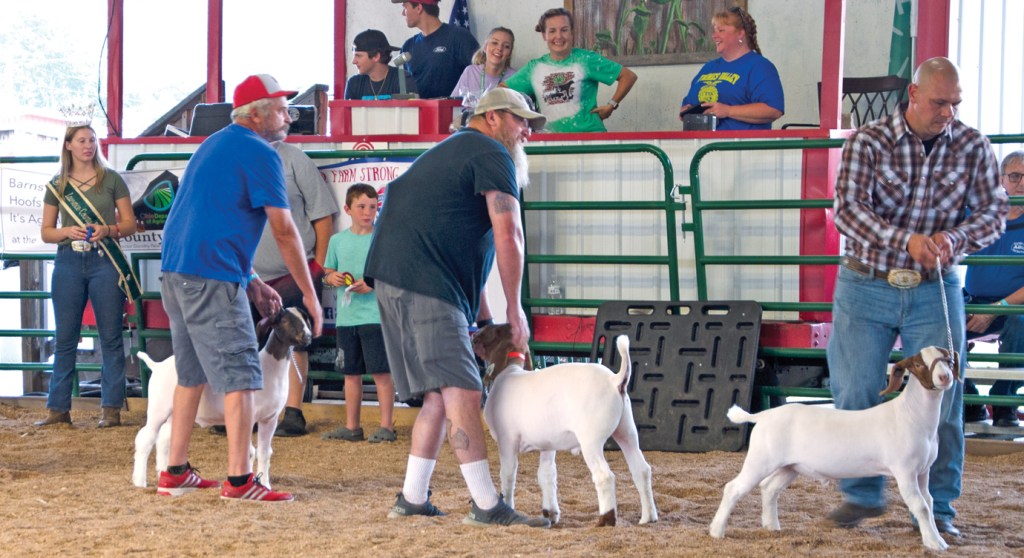 An Old Timer Showmanship competition took place at the Lawrence County Fair on Thursday. Watching from the booth, at center, are Brea Belville, president of the Lawrence County Junior Fair Board, which organized the event, and Rachel Fraley, 4-H extension educator for the county. (The Ironton Tribune | Heath Harrison) 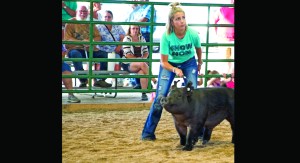 Trista Ferguson takes part in the hog showmanship portion of the Old Timer Showmanship event. She ultimately was winner of the competition. (The Ironton Tribune | Heath Harrison)

ROME TOWNSHIP — After several days of animal competitions by 4-H members, Thursday saw the debut of a special event at the Lawrence County Fair.
An Old Timer Showmanship Competition took place in the main barn, giving adults a chance to show their skills at presenting animals.

The event was organized as a fundraiser for the Lawrence County Junior Fair Board, the group’s president, Brea Belville, who served as announcer for the evening, said.

While most of the participants were past 4-H and FFA members, it was open to all.

“Anyone who wanted to participate,” she said. 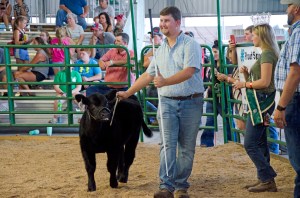 A large crowd turned out to people from the community, from a range of ages, to get in the ring and show hogs, lambs, goats and cattle.

After several classes in each category, a winner was selected, with Trista Ferguson winning for hogs, Kent Wells for goats, Ethan Cade for lambs and Levi Cade for cattle.

The judge for the event was Rashel Fallon, who teaches agriculture for Vinton County Schools.

“This is a great event to fundraise and revisit,” she said, thanking all who took part. “That competitive spirit is still there and wanting to win.”

All money raised will go toward the junior fair board, which plans the 4-H and FFA events for the fair each year. A second fundraiser for the group, the sweet tooth auction, took place earlier in the week.