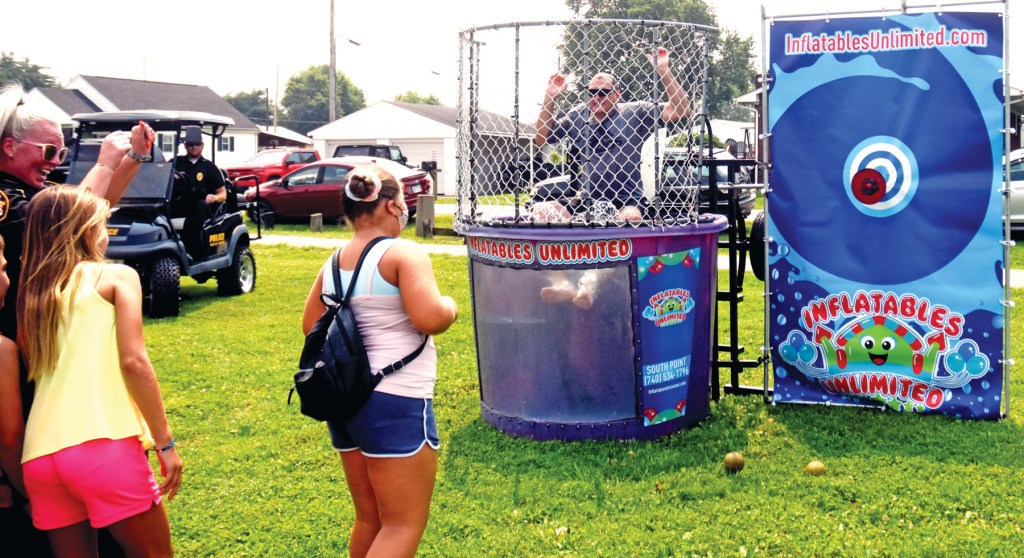 Lawrence County sheriff Jeff Lawless gets dunked after a child hit the red target on the dunk tank at the Impact Prevention and Parks aLive event at South Point Village Park on Tuesday. (The Ironton Tribune | Mark Shaffer)

Besides the park equipment, kids could check out various first responder vehicles including a Lawrence County EMS ambulance and the rescue squad vehicle and the heavy response vehicle from the Fayette Township Volunteer Fire Department as well as large construction equipment.

There were free ices from Kona Ice and free pizza from Matney’s Wood Fired Pizza. There was also free popcorn.

“This is our second installment of Faith and Funfest and Parks aLive event, said Eddie Neel, the public information officer for Impact Prevention. “We’re at the South Point parks and we have a lot of agencies out here creating a positive atmosphere for the youth.”

He said the goal was to get kids out and have them connect with their families and just make positive connections in the community.

“We have a lot of good families out here and that is our intent,” Neel said. “During COVID-19, we saw a lot of isolation and an increase in depression and anxiety. We just want to have a positive atmosphere where people could come and reconnect. I love seeing the smiles on faces and people having a good time.”

One of the best times was when kids lined up for their chance to soak a law officer.

And the officers were probably a bit surprised at the number of kids that could hit the red target with a gold ball that triggered a release on the seat and dropped them into the tank of water.

Sheriff Lawless seemed to enjoy himself, once he found out the water in the dunk tank wasn’t too chilly.

“It’s for a good cause,” he said. “Impact Prevention has done a lot to help our community and our youth. I felt this was a good thing to do for the kids. And I was hoping they were going to warm the water up but it was still kind of cold.”