Local veteran of Normandy dies at 98 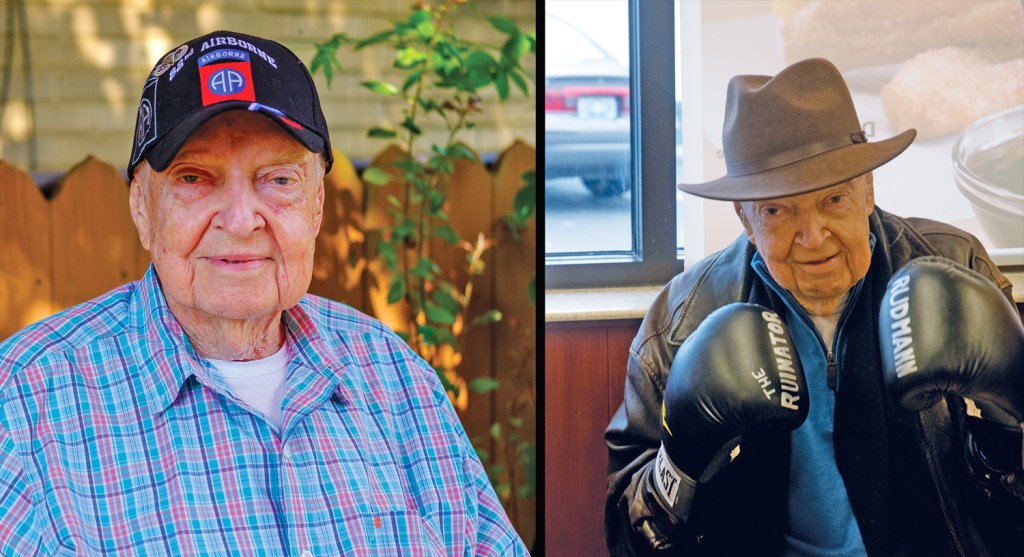 LEFT: Lawrence Rudmann, a World War II veteran who, as part of the U.S. Army’s 82nd Airborne Division, was a paratrooper during the D-Day landing at Normandy, France, is seen at his home in Ironton on July 10, 2020. (The Ironton Tribune | Jeremy Holtzapfel) RIGHT: Lawrence Rudmann shows off a pair of boxing gloves that his friends gave him as a 97th birthday gift in January 2020. (The Ironton Tribune | Mark Shaffer)

Rudmann was POW after D-Day

A local hero from the Greatest Generation of World War II has passed.

Lawrence Rudmann Sr., of Ironton, was a paratrooper in the Normandy landing on D-Day and one of the first of the Allies to enter German-occupied France on June 6, 1944.

Rudmann served in the 82nd Airborne and was one of the last surviving POWs from World War II in Ohio.

Rudmann spoke with The Tribune last year about his experience for a special section commemorating the 75th anniversary of the war’s end.

Jumping out of a C-47 twin-engine cargo plane, Rudmann landed in a tree in Normandy and had to cut himself free of his parachute lines.

Finding his friend, George Hickey, of New York, the two joined with others and took part in the liberation of the French village of Sainte-Mere-Eglise.

After five days of the mission, Rudmann, a 20-year-old corporal and infantry rifleman, was captured by the enemy and marched to a prison camp in Germany, where he spent 11 months until the war’s end. Hickey was killed in the fighting.

Rudmann said conditions in the camp were brutal and recalled being headbutted by one of the guards and forced to eat a grass soup with maggots in it.

Awarded two bronze stars, he returned to civilian life and made a career working at Allied Chemicals at South Point and Haverhill.

In 2020, Rudmann, a regular at the Ironton McDonald’s restaurant, was surprised by his friends for his birthday, when they threw a surprise party for him and Korean War veteran Bill Kerns.

The two became friends at the restaurant and, after Kerns found out that German soldiers had taken Rudman’s silver jump wings and hat as prizes in the camp, he ordered him new wings and a ball cap with his unit logo on it.

Rudman was a member of the congregation at St. Lawrence O’Toole Church. He and his wife Margie, who died in 1986, had five children.

A funeral and celebration of life will be held at a later date to be announced.