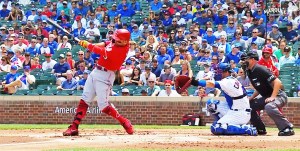 CHICAGO (AP) — Joey Votto set a Cincinnati Reds franchise record with another powerful show at Wrigley Field, while Kris Bryant was only a spectator in what might have been his last game with the Chicago Cubs.
It was the last game in a Cubs uniform for popular first baseman Anthony Rizzo.
Votto went deep for a Reds-record sixth game in a row. That includes his six homers in the four-game series against the Cubs that Cincinnati wrapped up with a 7-4 win Thursday, the day before the MLB trade deadline.
“It’s cool,” Votto said. “I’m just glad we came out with wins and are playing good baseball. I just want to be a part of that.”
Like Bryant, Rizzo wasn’t in the Cubs lineup and never appeared in the game.
Moments after the final out, 2016 NL MVP Bryant was seen sitting on the bench in the Cubs dugout and staring out at the field that has been his home for all seven of his big league seasons. The 2015 NL rookie of the year was an All-Star for the fourth time this season.
While Bryant waited to see if he would be dealt, the New York Yankees acquired Rizzo and cash from the Cubs for two minor leaguers. The 31-year-old Rizzo had been a fixture at Wrigley Field for a decade, and with Bryant helped the Cubs break their long World Series drought with a championship in 2016.
Votto’s 20th homer of the season was a two-run shot in the first, when he hit a fastball from Alec Mills (4-4) into the center field bleachers. It was the eighth homer for the 37-year-old first baseman in his six-game streak for a record that dated back to 1900.
Chicago went ahead 3-2 lead before the Reds roughed up Mills in the sixth to go ahead to stay. After loading the bases with no outs, Tucker Barnhart drove in two runs on a soft groundball that went through the middle of the infield for a 4-3 lead.
“There’s some tough things laying, kind of heavy on our shoulders, over our heads,” Mills said, referring to the trade deadline. “We’re still trying to win ball games, we’re still at the end of the day, in the dugout doing what we can to win that day.”
The Reds have won five of their last seven games to stay in second place in the NL Central behind the Milwaukee Brewers.
“We have a great team that’s going to lead us into the latter half of the season and hopefully to a World Series as well,” winning pitcher Luis Castillo said.
Cincinnati added three runs off the Cubs bullpen in the seventh, with Kyle Farmer and Aristides Aquino each driving in a run and a Chicago error allowing a third to score.
The Cubs scored three runs off Castillo (5-10), who had only given up three runs total in his previous four starts. Patrick Wisdom hit his 16th home run in the fourth, and Wilson Contreras belted a two-run shot in the fifth.
Castillo finished with eight strikeouts in six innings, allowing seven hits.
Ian Happ hit a home run in the ninth off Reds reliever Heath Hembree.
TRADING PLAYERS
Reds: Traded RHP Ashton Goudeau to the Colorado Rockies for cash. The team added RHP Mychal Givens and optioned RHP Ryan Hendrix to Triple-A Louisville.
Cubs: Traded RHP Ryan Tepera to the Chicago White Sox for LHP Bailey Horn.
“I’m excited,” Tepera said. “It’s kind of a unique thing for a trade to happen between crosstown rivals. I’m excited. Obviously going to a first-place team, playoff contention, I’m looking forward to it.”
TRAINER’S ROOM
Reds: Cincinnati manager David Bell said Mike Moustakas (heel) could start rehab games early next week in Louisville … Nick Senzel (knee) will start a rehab assignment in Louisville on Friday … Michael Lorenzen (hamstring) could return to the bullpen in New York this weekend … Bell said Nick Castellanos will test out his wrist and seems to be doing more each day.
Cubs: SS Nico Hoerner (right oblique strain) and RHP Dillon Maples (blister) were put on the 10-day injured list. INF Sergio Alcántra and RHP Trevor Megill were recalled from Triple-A Iowa. … RHP Kohl Stewart (albow) was transferred to the 60-day IL.
UP NEXT
Reds: RHP Sonny Gray (2-6, 4.50 ERA) starts the opener of a three-game series in New York against the Mets on Friday night. Gray will look to rebound after allowing 13 runs over his last two starts.
Cubs: RHP Trevor Williams (4-2, 5.06 ERA) starts at Washington on Friday night.