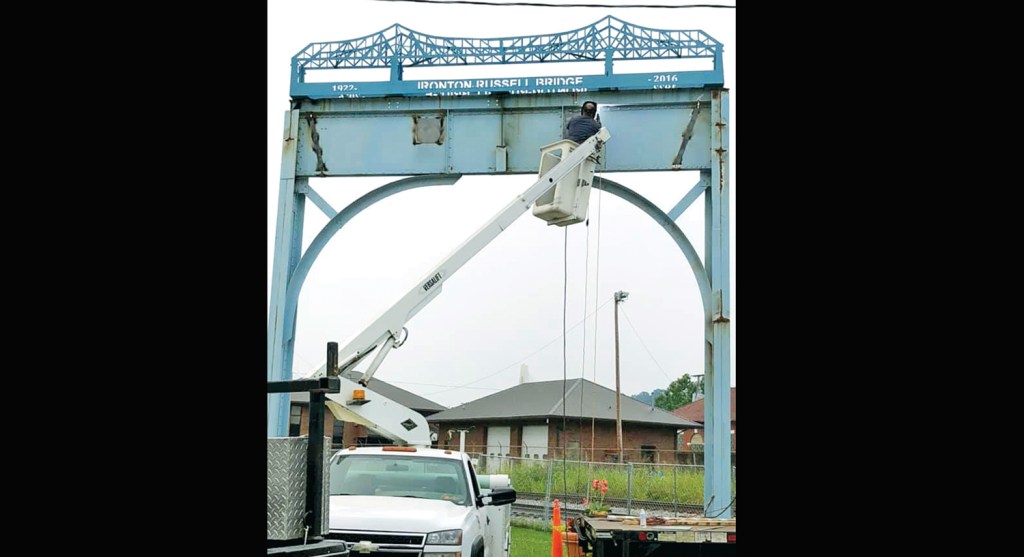 A worker from Swift Manufacturing welds a sign they made celebrating the old Ironton-Russell Bridge onto the only remaining bridge support on Tuesday morning. The company made and installed the sign as a donation to an effort to improve the area around the splash park in Ironton. (Photo Submitted) 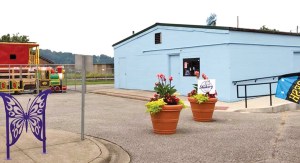 The Shakery, a concession stand opened up by the Shake Shoppe by the Friends Splash Park in downtown Ironton, got a new coat of paint through a donation. (Photo Submitted)

Anyone passing by the Friends Splash Park in downtown has probably noticed a lot of improvement in the past month.

The Shakery, which The Shake Shoppe opened as a concession stand earlier this summer, has been painted blue, a couple of large caboose and cars have been installed and metal pieces of art are now in place.

On Thursday morning, the last remaining support of the old Ironton Bridge got a new topper, a small-scale replica of the bridge made by Swift Manufacturing of Ironton.

Ironton mayor Sam Cramblit said that the company made and installed the large piece as a contribution.

“It looks really good. We now have a beautiful piece of art on it.” he said. “Swift Manufacturing agreed to do that for us as a donation. The project itself is a collaborative effort of many different organizations.”

Ironton aLive, through a PNC Bank, grant bought paint for the Shakery and rest room building and workers from the Ironton-Lawrence County CAO pressure-washed and painted the buildings. The city did improvements on the Shakery’s roof. “It’s kind of neat to see all that is happening there.”

The trains are owned by the Friends of Ironton and the caboose was repainted and had a ramp built by students from Collins Career Technical Center.

Cramblit said that he and others began the push for the improvements in late April and are happy with the results they have seen so far.

“We hope to have additional improvements done by the end of the summer,” he said.

Plans include refurbishing the old caboose into a space for events and putting up fencing for safety. He added they plan to repaint the bridge support to cover up the rust spots.

The goal of the improvements is to make downtown more attractive to visitors and bring more business to the area.