Reds to honor Morgan on Sunday 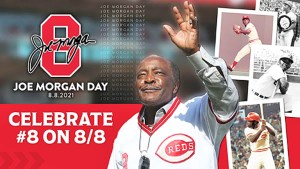 CINCINNATI — On Sunday, August 8 – 8/8 – the Reds will honor one of the greatest players in baseball history, legendary No. 8 Joe Morgan.
As part of this special “Joe Morgan Day,” the Reds will salute not only Joe’s Hall of Fame career on the diamond but the lasting legacy and impact he left on the community in Reds Country.
Many of the ceremonies will take place prior to the Reds vs. Pirates game scheduled for first pitch at 1:10 p.m. The first 15,000 fans in attendance at the game will receive a Joe Morgan No. 8 baseball cap, thanks to Delta Air Lines.
JOE MORGAN DAY HIGHLIGHTS
Pregame ceremonies scheduled to include Joe’s family, fellow Hall of Famers Johnny Bench and Barry Larkin and representatives from the National Baseball Hall of Fame and Museum in Cooperstown.
Joe’s official plaque from the National Baseball Hall of Fame on display inside the main gates at Crosley Terrace for photo opportunities during the game.
A floral arrangement placed at the Joe Morgan statue on Crosley Terrace and opportunity for fans to sign a banner with their messages paying tribute to Joe.
A proclamation by Cincinnati Mayor John Cranley declaring Sunday, August 8 as Joe Morgan Day.
Moment of silence honoring Joe followed by The Mistics singing the national anthem wearing No. 8 Joe Morgan jerseys.
Tributes to Joe throughout the game, including a No. 8 in the dirt behind second base and videos highlighting Joe’s great moments and accomplishments on and off the field.
A limited number of Morgan Red Lip Gloss, created by Joe’s daughter Lisa Morgan, will be available in the Reds Hall of Fame shop in the First Star Fan Zone.