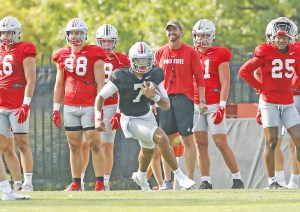 Head coach Ryan Day says there’s no frontrunner for the starting quarterback job yet, but C.J. Stroud has been first in line during the parts of practice open to the media. (Photo By MCT Direct)

COLUMBUS — Ryan Day has said several times that he would like to pick Ohio State’s starting quarterback sooner, not later.
Judging by what he said during a press conference on Monday the decision whether the starter will be C.J. Stroud, Jack Miller or Kyle McCord could be made as early as next week or the week after that.
“After this week we’re going to have a really good feel. Wednesday will be a big day, Saturday will be a big day. We’ll take Sunday off and come up for air and at that point I think we’ll have a pretty good feel. Maybe it will take another week after that. We’ll see,” Day said.
“We’re kind of getting into practice five, we’re getting into 20 practices now when you include the spring. So this is a pretty good body of work that we’re putting together day after day. Will it be ready next week? I don’t know but it will be pretty close to that timetable.”
But Day also said none of the quarterbacks has moved ahead of the other two.
He said one of the toughest things for the three quarterbacks about the competition to be the starter might be his critiques of them in practice.
“I try to tell them all the time, ‘If you can survive practice with me kind of getting after you, the game will be easy,’ ” he said.
“That’s sometimes hard on those guys. I try to help them understand how hard it is to win a game. Playing quarterback here our expectation is the Heisman Trophy and a national championship and a first-round draft pick. A lot comes with that. It doesn’t just happen. It takes time. It takes reps (repetitions) and it takes failure and preparation.
“It takes all of these things to get to where you need to go. The pressure has never been higher for those guys. They understand it. They’ve been great. Their attitude has been wonderful.”
Other updates from Day:
— CHAMBERS ALL IN AT LINEBACKER: Steele Chambers, who has had 28 carries as a running back over the last two seasons, is now a full-time linebacker.
“The guys (coaches) on defense have been very, very impressed from the jump. You can usually tell right away if somebody is just natural at it and he is. He’s very, very athletic. He has really upgraded that room and I expect him to make an impact this season,” Day said.
“I hope he can provide depth early in the season and grow into a more consistent role as the season goes on. It’s all new to him.
“Not only is he intelligent, he has the skill set to do it. I know all the guys and I are very, very excited to see kind of where this goes over the next couple weeks to see if he can take strides to be able to help us and give us some plays early in the season and then have a more significant role in the middle to the end of the fall,” he said.
— BURKE MAKES IMMEDIATE IMPRESSION: Denzel Burke, a 4-star freshman cornerback from Scottsdale, Ariz., has caught the attention of OSU’s coaches.
“You can’t tell he’s a freshman. He has walked in and competed right from the time he stepped on the field. He takes it very seriously. His talent level is there. He attacks every day,” Day said.
“He goes up against Garrett (Wilson), he goes up against Chris (Olave). He doesn’t back down. He has a lot of confidence. He’s a serious guy. He has a chance to be a very, very good player. The more depth we can have at that position the better off we’re going to be.”
— TUIMOLOAU STARTS FAST: Five-star freshman defensive end J.T. Tuimoloau has been impressive in preseason practice, Day said.
“He has made up a lot of ground in a very short time. He has flashed. He’s still learning, he still has moments when he is not sure exactly where to go or what to do. But you can see certainty the flashes and brilliance of a 272-pound defensive end who can run.
“When he does know exactly what he’s doing he has made a lot of plays and people have had a hard time blocking him. When you see him run he looks more like a 250-pound player. Great hands. Great power and body control. Good start and a long way to go but the talent is certainly there.”
— BANKS TEMPORARILY SIDELINED: Veteran cornerback Sevyn Banks has been bothered by an unspecified injury, Day said.
“He tweaked something and has been out the last couple practices,” he said.

CLEVELAND (AP) — José Ramírez hit a two-run homer and an RBI triple, leading the Cleveland Indians to a 9-3... read more