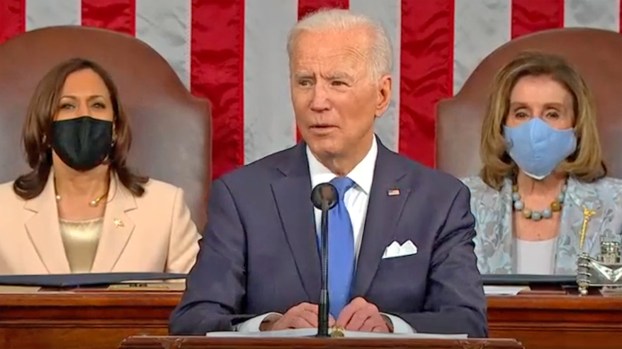 President Joe Biden gave an address to a joint session of Congress on in January.

Officials differ in reaction to Medicare decision by Biden

WASHINGTON, D.C. — Officials from Ohio offered differing opinions on the decision by the Centers for Medicare & Medicaid Services, a part of the President Joe Biden’s administration for ending a policy approved by the Donald Trump’s administration that placed work requirements on Medicaid recipients.

U.S. Sen. Sherrod Brown, D-Ohio, praised the decision, which he said would stop a situation that had the potential to force thousands of people off of their health insurance coverage.

“We should be making it easier for Ohioans to access care, not harder — especially at a time when Ohioans are fighting against the COVID-19 global pandemic.” Brown said. “Medicaid is a program that helps working families and burdensome work requirements create a barrier to health care for those who need it most, especially those who suffer with addiction.”

Brown’s office pointed to a letter the Centers for Medicare and Medicaid Services sent to the state, that said it is risky to tie work requirements to Medicaid eligibility since no one knows what long-term effects the COVID-19 pandemic will have on the economy.

Brown’s office said, in 2014, the state of Ohio expanded Medicaid to cover adults making up to 138 percent of the federal poverty rate – about $30,305 for a family of three. This group is referred to as the Medicaid expansion population and it’s the same group that would have had to abide by work requirements. In a 2018 report, the Ohio Department of Medicaid reported about half of this group had received treatment for mental illness or addiction. Medicaid is an essential safety net program, and the implementation of work requirements would have made it harder for Ohioans to access it in a time when overdose deaths are rising.

In 2019, the previous administration approved a request from the state of Ohio to require Medicaid recipients work at least 20 hours per week or be engaged in other approved activities in order to maintain their health coverage. The requirements were supposed to go into effect in January 2021, but were put on hold due to the coronavirus pandemic.

“Ohio’s reasonable approach provided individuals with options while supporting them on their way to self-sufficiency,” DeWine said. “The Biden Administration’s decision was short-sited and contrary to our statewide effort to improve public health. By requiring an individual to work, learn new job skills, or be involved in a recovery program, Ohioans would be providing critical assistance to individuals when they needed it while laying the groundwork for their success in the future.”

His position was shared by U.S. Sen. Rob Portman, R-Ohio.

“The Biden administration’s decision is extremely disappointing,” Portman said. “Work requirements provide much-needed flexibility in the Medicaid system to provide greater well-being and self-sufficiency to individuals who are able to work while slowing the growth rate of Medicaid and thus the burden on taxpayers. I will continue to advocate for bipartisan common-sense solutions to address the affordability of health care and the long-term budget implications of Medicaid on the state and federal level.”

Ohio University to have 2020 commencement on Sept. 5

In-person event will be outdoors on College Green ATHENS — Ohio University will celebrate the Class of 2020 with an... read more