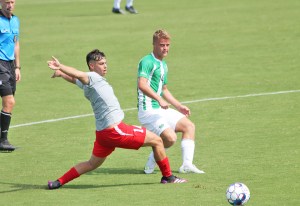 RIO GRANDE, Ohio — The University of Rio Grande and Marshall University battled each other – and the sweltering heat – before settling on a scoreless draw, Friday morning, in exhibition men’s soccer action at Evan E. Davis Field.
The two teams played a pair of 45-minute periods, but elected not to play overtime.
The “B” game between the two schools, which was played simultaneously on the adjacent practice field, ended in a 1-1 deadlock with no overtime period.
The Thundering Herd, which was making its first appearance since winning the NCAA Division I national championship in May, outshot the RedStorm 16-7 overall and 6-0 in shots on goal.
Marshall’s first half lineup was comprised of its regular starting lineup — including All-American Vitor Dias — and head coach Chris Grassie’s club peppered Rio Grande goalkeeper Daniel Merino with 11 shots, five of which were on frame.
Merino made a trio of dazzling stops, though, to keep the Thundering Herd off the board.
The RedStorm managed five of their seven shots and three of their four corner kick chances after halftime, but failed to find the back of the net.
Merino went the distance in goal for Rio Grande, while Oliver Semmle played the first half and Cooper Blay was in net in the second half for Marshall.
The Thundering Herd is now 0-4-2 all-time in its six exhibition contests with head coach Scott Morrissey’s RedStorm.
Rio Grande will play its final preseason tuneup at Mount Vernon Nazarene on Tuesday, while Marshall departed immediately following Friday’s matchup for Chapel Hill, N.C. where it will face the University of North Carolina in the second of its three preseason exhibitions on Sunday.

CINCINNATI — On August 27, the Cincinnati Reds Hall of Fame and Museum presented by Dinsmore will honor legendary broadcaster... read more