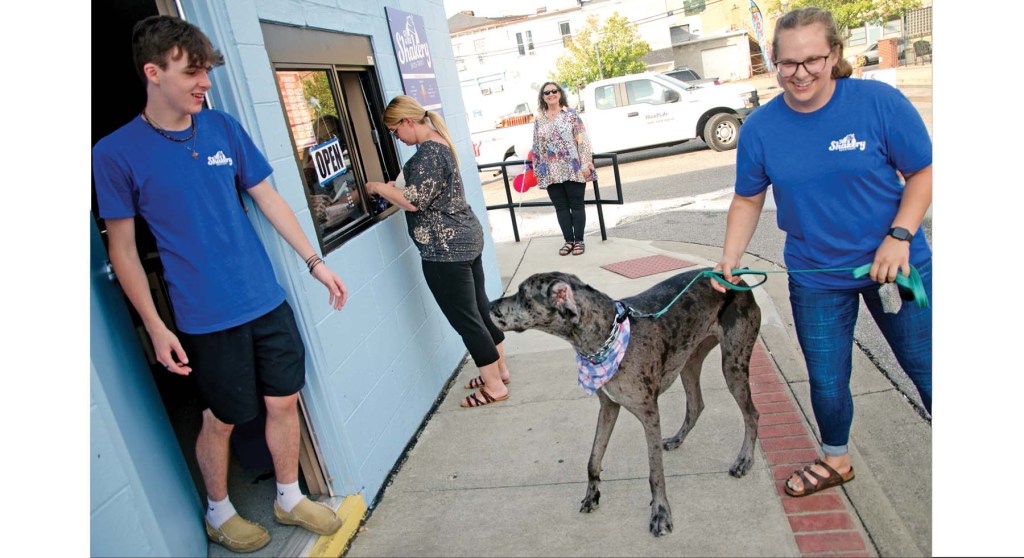 Shake Shoppe owner Maddie Cogan and her dog, Luna, greet employee Wyatt Sturgill at the grand opening of The Shakery, a second location for the business, on Tuesday. (The Ironton Tribune | Heath Harrison) 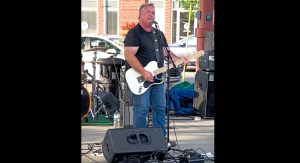 Tuesday was a busy day for downtown Ironton.

It saw another installment of the Tuesday night concert series at the Farmers Market, while, at the adjacent splash park, The Shakery hosted its grand opening celebration.

The Shakery is a second location for The Shake Shoppe, located on Liberty Avenue in Ironton.

That business was purchased by Robbie Brown and Maddie Cogan in June 2019, relaunching a local institution.

Cogan said The Shakery, which has a condensed menu of their offerings, including hot dogs and milk shakes, had a soft opening on June 10.
She said it is staffed by employees of The Shake Shoppe, who rotate and work at both locations.

“It’s been great so far,” she said of business since June. “We’ve had a lot of support from the community and having The Shake Shoppe’s hot dog sauce helped to keep it familiar.”

The opening of The Shakery is part of a number of downtown improvements to the area, including a train, run by Friends of Ironton, restroom upgrades, new bike racks and a memorial to the old Ironton-Russell bridge.

For Tuesday’s grand opening, Cogan said they had an inflatable water slide on hand and were doing door prizes and giveaways.

“We were really busy this afternoon,” she said, but said the crowd thinned somewhat after a heavy thunderstorm around 3 p.m.

A steady stream of customers were still dropping by and Cogan said she expected more as the concert at the Farmers Market picked up.

Despite the heat wave hitting the area, a crowd was gathering to watch Chain Reaction, a classic rock band, perform.

Sam Heighton, of Ironton aLive!, said there are two more of the weekly shows left for the season.

Next Tuesday will be Cole Gannon, a young vocalist that has built up a big following.

Then, on Aug. 24, the final show will be The Chase featuring John Griffiths.

“They play 70s and bring a big crowd,” Heighton said.