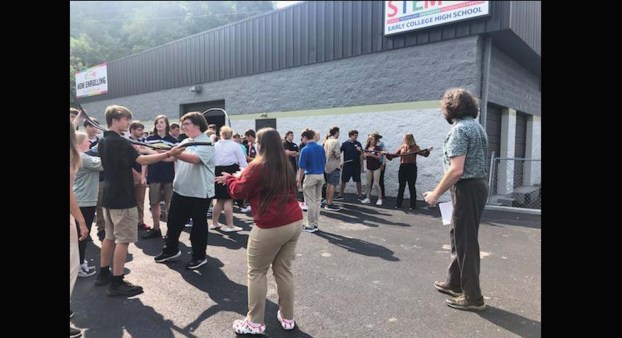 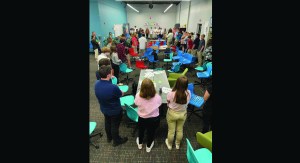 The school’s 75 students, both new and returning, split into four groups, with each working on a section of a Rube Goldberg machine.

Named for the 20th century cartoonist who featured them in his work, the machines are convoluted contraptions that perform simple tasks.

The students’ machine was crafted from everyday items and features books arranged as falling dominos and wind chimes, crafted from PVC pipe, among its components. When completed, it is designed to play music as its many parts work together.

The students were set to activate it on Friday morning, school director Josh Joseph said.

Joseph said Immersion Week, which takes place before the academic year begins, serves as an orientation for new students to familiarize them with the campus and allows the school’s entire student body to learn to work together and form friendships.

The STEM+M School, a public school serving students across Lawrence County, is located on Solida Road in South Point.

Its fifth year of classes will start in person on Monday.

A national group is making an Ironton stop for a tour aimed at tackling the opioid crisis. The Briermost Foundation... read more