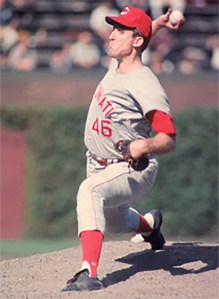 Cincinnati Reds’ Hall of Fame pitcher Jim Maloney delivers a pitcher during his no-hitter against the Cubs in Chicago on Aug. 19, 1965. Maloney pitched 10 innings to get the no-hitter and a 1-0 win . (Courtesy of The Cincinnati Reds.com)

FRESNO, Calif. — If Jim Maloney was pitching today like he did during his career, manager David Bell would have ulcers, vice-president and general manager Nick Krall would pass out and Chief Executive Officer and owner Bob Castellini would suffer a heart attack.
For Maloney, there was no pitch count. There was no “five inning quality start” and then turning the game over to the bullpen that might or might not protect the lead and get you a win.
A prime example was his no-hitter 56 years ago on Aug. 19, 1965.
“They had no pitch counts. If you were throwing the ball good and getting guys out, the way the manager could tell and the way you could tell was they started getting good swings on me and started getting better contact on the ball and I wasn’t fooling anybody or I couldn’t get the ball by somebody. The hitters would let the manager know (the pitcher) was losing a little bit of his stuff,” said Maloney.
It was fair to say that Maloney wasn’t his usual sharp self that day, but his competitive nature was front and center.
Maloney turned in a 10-inning no-hitter and beat the Cubs in Chicago at Wrigley Field when shortstop Leo Cardenas belted a home run in the top of the 10th that hit the foul pole.
The hard-throwing Maloney struck out an impressive 12 batters, but he walked 10 and hit another batter as he allowed the most baserunners in a no-hitter since 1901.
And he threw 187 pitches, not counting his warmup tosses before each inning.
“I always wanted to go the route and finish every game I started,” said Maloney. “It didn’t always work out that way but I sure tried. The times, unfortunately, are different today.”
Maloney, who turned 81 on June 2, was one of baseball’s premier pitchers during his career with the Reds. Maloney was clocked at 100 miles an hour during an era when pitches were gauged as they crossed home plate and not their exit speed which is used in today’s game.
No-hitters weren’t uncommon to Maloney who also threw three one-hitters in his career.
Maloney had thrown a 10-inning no-hitter on June 14 of 1965 at home against the New York Mets only to lose in the 11th inning when rookie right fielder Johnny Lewis hit a home run. The Mets got another hit and the Reds lost 2-0.
The game was recognized at a no-hitter at the time but has since been changed since Major League Baseball decided to omit no-hit games that were broken up in extra innings.
Maloney threw a no-hitter on April 30, 1969, against the Houston Astros as the Reds won 10-0 at Crosley Field. Maloney struck out 13 and walked five.
The catcher was future Hall of Famer Johnny Bench who was just 20 years old at the time. Bench said Maloney threw harder than any pitcher he ever caught in his career and that included any pitchers he caught in All-Star Games.
“He wore me out,” said Bench.
Ironically, Houston’s Don Wilson pitched a no-hitter the next night as the Astros beat the Reds 4-0.
A ruptured Achilles tendon ended his career prematurely in 1970 and cost Maloney a chance to be the early ace of the Big Red Machine era that lasted from 1970-79.
However, Maloney doesn’t concern himself on what might have been.
“I don’t dwell on it. I did have a rough time when I had to get out of baseball. It came within a year and a half and I was out of baseball,” said Maloney.
“I had a tough time sliding back into the real world.
For his career, Maloney had 20-win seasons in 1963 (23-7) and in 1965 (20-9). He was also 16-8 in 1966 and struck out 216 batters. He was 16-10 in 1968 with 181 strikeouts.
Maloney finished with a 134-84 record, a 3.19 earned run average and 1,605 strikeouts which still stands as a Reds’ record.
Maloney won 10 or more games from 1963-1969 and had more than 200 strikeouts in for consecutive seasons from 1963-66. And with fewer teams in the majors during his career, Maloney faced some of the all-time great hitters more often compared to today’s game.