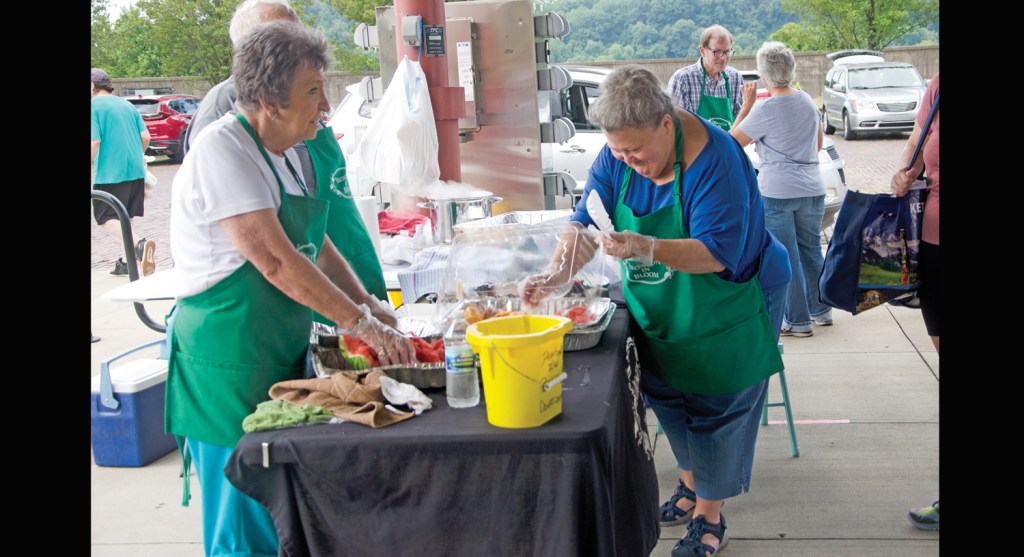 Sue Lunsford and Linda Myers serve watermelon and corn on the cob at Ironton in Bloom’s Second Saturday event at the city’s farmers market. (The Ironton Tribune | Heath Harrison) 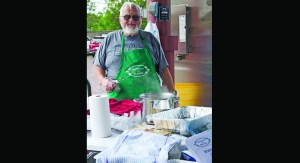 Ken Myers cooks up corn on the cob. (The Ironton Tribune | Heath Harrison)

Once a month, those entering the Ironton Farmers Market are greeted with an offering of free treats.

Volunteers from Ironton In Bloom set up, preparing fruits and produce for passersby.

“We do this every second Saturday,” Ralph Kline, with the group, said. “We’re offering free samples of local watermelon today.”

Kline said they do it to give those shopping an idea of offerings of local produce on sale at the market and to answer questions about preparation.

In addition to the watermelon, members of the group were slicing up fresh cantaloupe and had a pot going, boiling corn on the cob, which they buttered and served on a stick.

Kline said, each time, they pick a different theme.

“Next month, we’ll do a fried bologna sandwich,” he said. We’ll have big tomatoes around that time, and sweet onions.”

He said, for October, apples will be the theme, with fried apple biscuits being prepared.

Kline said the giveaways take place until the market closes for the season in October.

The farmers market, which features vendors from Lawrence County is located at 218 Second St., is open from 7 a.m.-3 p.m.  Vendors sell a variety of goods from seasonal produce like gourds and pumpkins to baked goods, honey, eggs, homemade candy, homemade crafts and flowers.

Ironton In Bloom is a nonprofit organization, dedicated to beautification projects in the city.