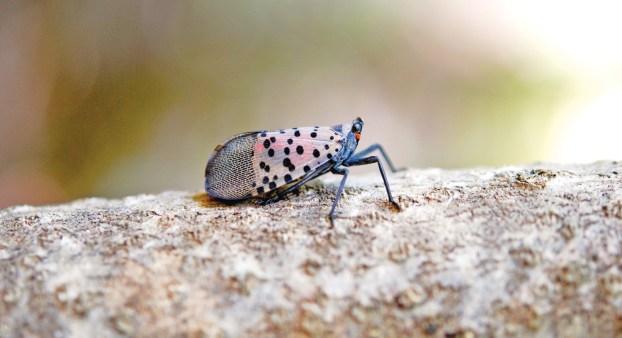 The spotted lanternfly, a native of Asia, has been spotted in Ohio and the agriculture Department wants to eradicate the bug, which can damage grape plants. (Ohio News Connection)

COLUMBUS — Ohio’s Department of Agriculture wants help from nature enthusiasts or anyone else who can assist in eradicating an invasive insect that can do significant damage to plants and crops.

The spotted lanternfly, a plant-hopper native to Asia, was discovered in the U.S. in Pennsylvania in 2014. In Ohio, it was first spotted in Jefferson County last fall.

The spotted lanternfly feeds on hops, grapes and fruit trees, as well as oak, pine, poplar and walnut trees.

David Adkins, agricultural inspection manager for the Plant Pest Control Section of the Ohio Department of Agriculture, asked people to report sightings of lanternflies, with a photo if possible and the exact location of the sighting.

“We are relying on the public to help us, quite a bit, on reporting,” Adkins acknowledged. “Because we don’t have a trap or any type of lure that really works in drawing the spotted lanternfly in so that we can take an inventory of the population.”

Adkins noted the lanternfly was found near train tracks in Mingo Junction, possibly brought by a train hauling trash to a Jefferson County landfill from the New York metro area.

The Agriculture Department is working with the state Department of Natural Resources, Ohio State University, the Ohio Grape Industries Committee and others to conduct ground and aerial searches, set traps and do educational outreach.
Adkins pointed out the main worry is how the spotted lanternfly will affect vineyards in the state.

“Our biggest concern right now is with the grape industry and the orchard industry,” Adkins explained. “We know very well they definitely attack the grapes, have killed some orchards over in Pennsylvania. But they also made the crop unusable, because of the honeydew that they deposit on the fruit.”

From late summer to November, lanternflies are easiest to spot because they’re in their adult moth stage.

Adkins said the department is also conducting a series of treatments on lanternfly nymphs and adults.

This winter, they’ll be treating any egg masses they find with horticultural oil, which kills the bugs but doesn’t harm wildlife.