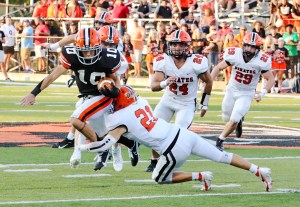 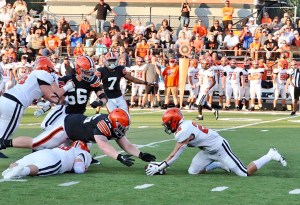 The legendary college football announcer Keith Jackson would have been busy in this game yelling “FUMBLE!”
Ironton turned three fumble recoveries into touchdowns and backup quarterback Jon Wylie came on early to lead the Fighting Tigers to a 40-6 win over the Wheelersburg Pirates on Friday in the season opener before a large crowd at Tanks Memorial Stadium.
With veteran starting quarterback Tayden Carpenter forced to leave the game due to an injury, the sophomore Wylie came on to spark the offense and the Ironton defense slammed the door on the Pirates’ offense with the exception of two pass plays.
“That’s the fortunate thing about us. We’ve got a lot of depth and a lot of guys who want to play and are willing to step up and when they get the big opportunity and big moment they don’t flinch,” said Ironton coach Trevon Pendleton.
Ironton racked up 312 total yards with 216 coming on the ground with eight different ballcarriers.
Jaquez Keyes ran seven times for 86 yards and scored twice to lead the ground game. Wylie ran six times for 31 yards and a touchdown and he was 4-of-10 passing for 80 yards and a score.
Ty Perkins caught two passes for 56 yards and a touchdown while Landon Wilson had the big defensive play as he picked off a pass at the 1-yard line and returned it for a touchdown.
Wheelersburg was limited to 70 net yards rushing and leading rusher Derrick Lattimore carried 11 times for just 20 yards.
Quarterback Bryson Stamper was 4-of-7 passing for 146 yards and a touchdown along with the interception. Two of his completion accounted for 141 yards as Josh Clark had one for 71 and Brock Brumfield one for 70 yards and touchdown.
“We want to eliminate one thing in the game and hang our hat on and that’s eliminating the run. We’re proud of that but, obviously, the explosive plays and the big plays we’ve got to clean those up and we’ve got to figure out a way to stop those,” said Pendleton.
Although Wheelersburg lost all three of its fumbles, Ironton was guilty of four fumbles — they lost one — and were penalized nine times for 70 yards.
That phase of the game didn’t sit well with Pendleton.
“Obviously, we didn’t play our best football. Sloppy, lot of mistakes. We’ve got to clean those up and hone in on the little things,” said Pendleton.
“We had good intensity. It was a humid night. I’m very proud of the effort of the kids. Even though things didn’t go our way a lot of times, a lot of penalties and a few misfortunes, we just kept clawing and digging and fought out way out of it.”
Both teams started slow and Wheelersburg was facing a third-and-7 when Stamper hit Brumfield on a 70-yard pass play when an Ironton defensive back gambled and lost on an interception and it was 6-0 with 3:13 left in the first quarter.
The Pirates were back at their 17-yard line on the first play of the second quarter when Angelo Washington recovered a fumble and Ironton was in business at the Pirates’ 17.
Wylie kept the ball and covered the real estate for a touchdown and Matt Sheridan connected on his first varsity extra point attempt and Ironton led 7-6 with 11:42 on the clock.
The Pirates used a 71-yard pass from Stamper to Clark to the Ironton 7-yard line three plays later.
But on second down at the 12, DeAngelo Weekly stripped the football and Lincoln Barnes recovered at the 21.
Ironton moved the ball to the 41 thanks to a 17-yard pass from Wylie to Perkins and then Keyes turned his first carry of the season into a 59-yard touchdown run and it was 14-6 with 8-minutes left in the half.
The Fighting Tigers forced another fumble on the first play following the kickoff and Nate Cochran recovered at the Pirates’ 39.
A 17-yard pass to Aaron Masters got the ball to the 23 and five plays later Keyes finished the drive with a 5-yard scoring run and it was 20-6 with 5:04 to go in the half.
Ironton had a fumble when a punt deflected off the return man and the Pirates recovered at the Fighting Tigers’ 3-yard line.
But the Pirates didn’t fare as well with their fumble recovery as the had a 2-yard loss and then Wilson picked off a pass at the 1-yard line and returned it 99 yards for a touchdown and Sheridan’s kick pushed the lead to 27-6 with 2:05 left.
Ironton tacked on a score with 3:11 to play in the game on a 7-yard run by Amar Howard. A 45-yard run by Ashton Duncan set up the score.
Ironton will host Jackson on Friday.
Wheelersburg 6 0 0 0 = 6
Ironton 0 27 7 6 = 40
First Quarter
Wh – Brock Brumfield 70 pass from Bryson Stamper (kick failed) 3:14
Second Quarter
Irn – Jon Wylie 17 run (Matt Sheridan kick) 11:42
Irn – Jaquez Keyes 59 run (Matt Sheridan kick) 8:00
Irn – Jaquez Keyes 5 run (run failed) 5:04
Irn – Landon Wilson 99 interception return (Matt Sheridan kick) 2:05
Third Quarter
Irn – Ty Perkins 39 pass from Jon Wylie (Matt Sheridan kick) 1:01
Fourth Quarter
Irn – Amar Howard 7 run (kick failed) 3:11
——
Wh Irn
First downs 7 14
Rushes-yards 36-70 33-216
Passing yards 146 96
Total yards 216 312
Cmp-Att-Int 4-7-1 6-14-0
Fumbles-lost 3-3 4-1
Penalties-yards 5-34 9-70
Punts-average 5-41.6 5-41-8
——
Individual Leaders
RUSHING — Wheelersburg: Derrick Lattimore 11-20, Carson Williams 7-26, Jake Darling 3-16, Bryson Stamper 8-minus 4, Eric Lattimore 1-minus 6, Ethan Glover 4-11, Creed Warren 1-5, Casey Doerr 1-2; Ironton: Amar Howard 11-35, Jaquez Keyes 7-86, Ashton Duncan 3-53, Tayden Carpenter 4-3, Jon Wylie 6-31, Aaron Masters 1-2, DeAngelo Weekly 1-6, Nate Cochran 1-2.
PASSING — Wheelersburg: Bryson Stamper 4-7-1 146; Ironton: Jon Wylie 4-10-0 80, Tayden Carpenter 2-4-0 16.
RECEIVING — Wheelersburg: Josh Clark 1-71, Brock Brumfield 1-70 TD, Eric Lattimore 2-5; Ironton: Ty Perkins 2-56 TD, Aaron Masters 1-17, Jon Wylie 1-10, Cole Freeman 1-6, Landon Wilson 1-7.