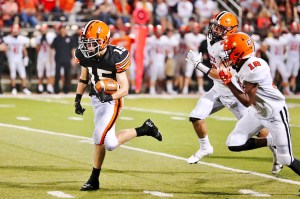 Ironton Fighting Tigers’ defensive back Landon Wilson (15) returns an interception 99 yards for a touchdown against Wheelersburg. (Photo By Tim Gearhart)

It’s been a while.
The last time the Ironton Fighting Tigers and Jackson Ironmen faced off was in 2014 with Jackson winning at home 33-21.
Jackson has won three straight including 26-19 in overtime at home in 2010 and 28-22 in 2011 with a late score.
However, Ironton leads the series 33-7-6. Former Ironton coach Bob Lutz was 20-3-1 including the program’s 600th win in 2007.
Both teams won their openers last week in easy fashion. Ironton rolled Wheelersburg 40-6 and Jackson cruised by Logan 42-7.
Jackson junior Jacob Winters accounted for four touchdowns as he hit 4-of-8 passing for 62 yards and a touchdown and ran five times for 88 yards and three TDs.
Besides Winters, Evan Spires went 8-for-10 passing for 100 yards and a touchdown.
Cade Wolford had 10 carries for 84 yards with a score, Tristan Prater caught three passes for 55 yards and a touchdown while Jake Wood had two receptions for 42 yards and a TD.
Ironton used a swarming defense and an opportunistic offense with some big plays to beat Wheelersburg for the second straight time.
The Fighting Tigers forced three fumbles and recovered all of them including one that led to a 17-yard touchdown run by sophomore quarterback Jon Wylie.
Defensive back Landon Wilson turned a first-and-goal sinuation into a touchdown for Ironton with a 99-yard interception return, the longest in Fighting Tigers’ history.
Ironton starting quarterback Tayden Carpenter tried to play despite an injury and Wylie came on to complete 4-of-10 passes for 80 yards including a 39-yard TD strike to Ty Perkins.