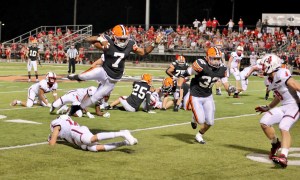 Ironton Fighting Tigers’ running back Jaquez Keyes (7) leaps over a Jackson defender as he rips off a 17-yard run during Friday’s non-league game. Ty Perkins ran a kickoff back 78 yards for a touchdown with no time on the clock as Ironton beat Jackson 13-10. (Photo By Tim Gearhart) 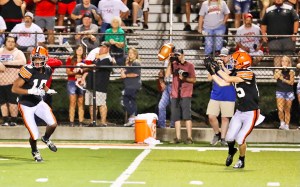 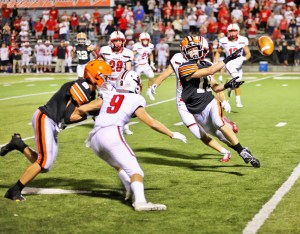 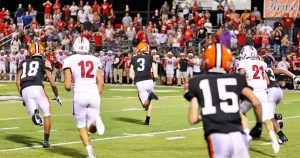 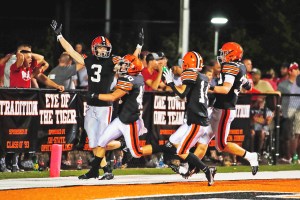 TOP PHOTO: Ironton Fighting Tigers’ Braxton Pringle (18) laterals the ball to Landon Wilson (15) during the kickoff return at the end of Friday’s game against Jackson; SECOND PHOTO: Wilson (15) laterals the ball back to Ty Perkins as the Jackson kickoff team closes in; THIRD PHOTO: Perkins (3) slips through the Jackson kickoff team and heads for daylight as he returns the kickoff 78 yards to beat Jackson. (Photos By Tim Gearhart)
BOTTOM PHOTO: Ironton Fighting Tigers’ Ty Perkins (3) celebrates with his teammates after returning a kickoff 78 yards for the winning touchdown with no time remaining to beat Jackson 13-10. (Photo By Josh Wilson)

There was lightning before the game caused an hour delay.
But any lightning during the game was delayed until the final second of the game as Ty Perkins returned the kickoff 78 yards for a touchdown after time had already ran off the clock and the Ironton Fighting Tigers managed to escape the Jackson Ironmen 13-10 on Friday night in a non-league game.
Jackson took a 10-7 lead with 0:01.4 second left to play on a 22-yard field goal by Ethan Crabtree and it was a foregone conclusion that the Ironmen had won.
But on the kickoff, Braxton Pringle ran back to get the ball and ran a short distance and lateraled to Landon Wilson who ran toward the Ironton sidelines and lateraled the ball to Ty Perkins at the 22-yard line.
Perkins eluded one tackle and cut to his right and turned on the jets as he found plenty of wide-open real estate and outran the final man Crabtree and into the end zone.
“Jackson was the better team tonight, but we found a way to win. That was one of the craziest plays I’ve ever been around,” said Ironton coach Trevon Pendleton.
“During the winter in the weight room we had a motto to just stay in the game. The kids fought hard the whole game and we made a big play.”
The defenses dominated the game until late in the fourth quarter when Jackson put together a 73-yard, 10-play drive that culminated with Crabtree’s field goal.
Jacob Winters carried the ball six times for 53 yards in the drive including a pivotal 31-yard run to the Ironton 31.
Winters finished with 121 yards on 23 carries after managing only 9 yards on 5 carries in the first half.
The Fighting Tigers finished with 179 total yards. Jaquez Keyes carried 7 times for 62 yards and Amar Howard added 51 yards on 12 attempts as Ironton had 113 yards rushing.
Jon Wylie was 5-of-15 passing for 36 yards and an interception.
The Ironmen ran for 141 yards and had 49 passing.
Jackson (1-1) ran 28 plays in the second half to only 19 for Ironton.
The Fighting Tigers also kept interrupting drives with five illegal procedure penalties. Ironton had nine penalties for 70 yards and lost one of four fumbles which led to a stagnant offense.
“We can’t have our defense be on the field that much,” said Pendleton.
Kickoff coverage has been a problem for Jackson. Logan ran back the opening kickoff last week for a touchdown in Jackson’s 42-7 win.
Wilson broke four tackles and returned the opening kickoff 56 yards to the Jackson 37, but the Fighting Tigers were unable to move the ball and punted to the 12-yard line.
The Ironmen were forced to punt and Ironton drove to the Jackson 22. Jon Wylie threw a pass to an open Howard but Howard slipped and fell and the ball bounced off him and into the arms of Reid Evans at the 11.
Jackson was guilty of its own turnover with a fumble two plays later and Angelo Washington recovered at the 10-yard line.
Keyes carried for 5 yards and Masters took the handoff and scored on the next play with 1:17 left in the first quarter.
Matt Sheridan added the conversion kick and Ironton led 7-0.
Neither team threatened the rest of the half until a Jackson punt bounced off an Ironton player and the Ironmen recovered at the Fighting Tigers’ 12-yard line.
Winters had a 9-yard run with half the team pushing the pile and Jackson had a first-and-goal at the 2.
Cade Wolford scored on the next play and Crabtree’s conversion kick tied the game with 30 seconds left in the half.
Ironton (2-0) will host Fairland (2-0) next Friday in what could decide the Ohio Valley Conference championship. Fairland routed Oak Hill 55-7.
Jackson 0 7 0 3 = 10
Ironton 7 0 0 6 = 13
First Quarter
Irn – Aaron Masters 5 run (Matt Sheridan kick) 1:17
Second Quarter
Ja – Cade Wolford 2 run (Ethan Crabtree kick) 0:30
Fourth Quarter
Ja – Ethan Crabtree 22 field goal 0:01
Irn – Ty Perkins 78 kickoff return (no attempt)
——
Ja Irn
First downs 11 9
Rushes-yards 37-141 35-143
Passing yards 49 36
Total yards 190 179
Cmp-Att-Int 5-14-0 5-15-1
Fumbles-lost 2-2 4-1
Penalties-yards 6-54 9-70
Punts-average 6-32.8 5-25.0
——
Individual Leaders
—Jackson: Jacob Winters 23-121, Cade Wolford 9-19, Evan Spires 5-1; Ironton: Jaquez Keyes 7-62, Amar Howard 12-51, Jon Wylie 11-18, Aaron Masters 3-8, DeAngelo Weekly 1-2, Ashton Duncan 1-2.
PASSING — Jackson: Jacob Winters 3-9-0 38, Evan Spires 2-5-0 11; Ironton: Jon Wylie 5-15-1 36.
RECEIVING — Jackson: Tristan Prater 3-24, Cade Wolford 1-10, Ethan Spires 1-9; Ironton: Aaron Masters 2-21, Amar Howard 1-5, Ty Perkins 1-11, Angelo Washington 1-minus 1.