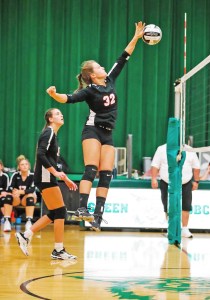 Coal Grove Lady Hornets’ Rylee Harmon (32) takes aim as she looks to score in a volleyball game against the Green Lady Bobcats on Monday. (Photo By Josh Wilson)

FRANKLIN FURNACE — The Coal Grove Lady Hornets, M.D.
No, the Lady Hornets aren’t medical doctors but they did get big performances from Murphy and Damron.
Kaleigh Murphy and Gracie Damron combined to lead the Lady Hornets to a non-league volleyball win over the Green Lady Bobcats on Monday.
Coal Grove won the first set 25-22, Green took the second set 25-20 and then the Lady Hornets won 25-21 and 25-12.
Murphy racked up 23 points with 5 aces. She also had 15 kills and 14 digs.
Damron also had a big game with 18 points, 9 kills, 2 blocks and 2 aces.
Kylie Montgomery added 15 points along with 8 kills and 8 digs for the Lady Hornets while teammate Maddi Hensley had 14 points and 6 digs.

Day worried as Buckeyes open on the road