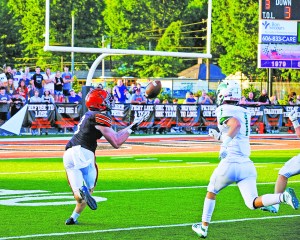 Ironton Fighting Tigers’ wide receiver Ty Perkins (3) gets behind the Fairland secondary as he hauls in a 52-yard touchdown pass during Friday’s game. Ironton won 20-14 in overtime. (Photo By Jeremy Holtzapfel)

The Ironton Fighting Tigers are providing a great medical service to their fans.
One week after the heart pounding excitement of their last second kickoff return win, the Tigers gave their fans’ cardiac muscles a nice workout with another game ending touchdown as they beat the Fairland Dragons 20-14 in overtime on Friday in a pivotal Ohio Valley Conference game.
This free exercise service would not have been possible this week without the help of a good outing by the Fairland Dragons.
In the first half Ironton struck first with Jon Wylie finding Ty Perkins for a 52-yard touchdown pass.
While the throw itself was quite impressive, Wylie’s play action fakes to buy himself time in the pocket to make the throw was what really made the play happen.
Remember Wylie’s faking ability, because it’s going to make a huge difference in the game later.
Fairland came back immediately when on the ensuing kickoff Zander Schmidt took the ball into the end zone for a 87-yard touchdown return, tying the game at 7-7.
The second quarter continued with neither team being able to find the end zone.
The Fighting Tigers were given a great opportunity to take the lead when a bad snap on a punt caused them to give Ironton the ball on the Fairland 25-yard line.
However, that Tiger drive was ended when the Dragons’ Steeler Leep intercepted a Tiger pass in the end zone.
Later in the quarter, the Dragons would end another Ironton drive with an end zone interception, this one courtesy of Kameron Kitts.
Fairland would take the following possession into Ironton territory, with the bulk of the yards coming from a nifty 26-yard shovel pass to J.D. Brumfeld. That drive would sputter out, causing Fairland to punt.
Unphased, the Dragon defense did their job and caused Ironton to punt the ball back to Fairland.
This gave Fairland excellent field position which they capitalized on with a 38-yard touchdown pass from Peyton Jackson to Steeler Leep. Fairland went into the locker room leading 14 to 7.
The third quarter saw Ironton draw even at 14 all when they marched down the field ending in a Landen WIlson touchdown run from inside the 1-yard line.
The end of the third quarter saw a spectacular display of athleticism by Fairland’s Zander Schmidt. Punting from his own 32 yard line, Schmidt saw the snap sail away from him.
Schmidt had to retreat to inside the 15-yard line, and through sheer will was able to collect the ball and get the punt off giving Ironton the ball on their side of the 50 instead of inside the Fairland territory.
The fourth quarter saw both teams trading punches with drives that ended because of the penalties that were insurmountable for the offenses to overcome.
The end of the fourth quarter saw Ironton drive the ball down to the Fairland 25-yard line.
Seconds left in the game, Ironton attempted a game winning field goal which was not good, leading to overtime.
Overtime saw Fairland having possession first and on their first play they fumbled the ball with Ironton’s Lincoln Barnes pouncing on the loose ball.
On Ironton’s ensuing possession they found themselves with a first and goal at the 10-yard line.
Wylie took the snap and faked the ball to Landen Wilson up the middle which drew in the Dragon defense.
Reminiscent of Lawrence County legendary quarterback Jerry Fields, Wylie kept ball himself, went around the right end and trotted 10 yards to the end zone giving Ironton the 20-14 victory.
Fairland 7 7 0 0 0 = 14
Ironton 7 0 7 0 6 = 20
First Quarter
Irn — Ty Perkins 52 pass from Jon Wylie (Matt Sheridan kick) 8:15
Fa – Zander Schmidt 87 kickoff return (Alex Bruce kick) 8:01
Second Quarter
Fa – Steeler Leep 38 pass from Peyton Jackson (Alex Bruce kick) 0:53
Third Quarter
Irn – Landon Wilson (Matt Sheridan kick) 3:14
Overtime
Irn – Jon Wylie 10 run (no attempt)
———
Team Statistics
Fa Irn
First downs 6 12
Rushing yards 81 162
Passing yards 162 124
Total Yards 243 286
Pentalties 14-115 9-80
Punts 3-33.3 2-29.5
———
Inviducal Leaders
RUSHING-Fairland: J.D. Brumfield 14-72; Ironton: Landon WIlson 19-110 TD, Jon Wylie 13-42 TD, Amar Howard 7-19.
PASSING–Fairland: Peyton Jackson 11-19-0 162 TD; Ironton: Jon Wylie 6-17-3 124 TD.
RECEIVING–Fairland: Steeler Leeep 2-63 TD, Zander Schmidt 4-31, Brycen Hunt 2-31, J.D. Brumfield 2-31; Ironton: Ty Perkins 2-61 TD, Aaron Masters 2-56.

Redmen cut down Oaks in Battle of the Hills