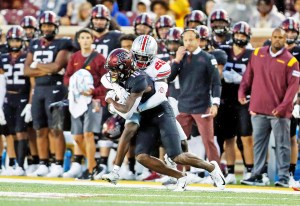 COLUMBUS – Ohio State freshman cornerback Denzel Burke impressed his head coach, his defensive coordinator and his teammates in his first start in college football when OSU won its season opener 45-31 over Minnesota last Thursday.
And it wasn’t just what Burke did, it was also how quickly he did it.
Ordinarily, freshmen don’t start at cornerback at Ohio State. But the Minnesota game was not ordinary.
One of OSU’s usual starting cornerbacks, Sevyn Banks, was in uniform but available only in an emergency. And the other first-team cornerback, Cameron Brown, did not make the trip to Minnesota.
Burke and redshirt freshman Ryan Watts moved into the starting lineup, with other young players, like Lejond Cavazos, next in line.
“I think his best football is ahead of him. He’s just a young true freshman out there playing in his first game in a conference game on the road. Talk about being thrown into the fire,” OSU head coach Ryan Day said on Tuesday at his weekly press conference.
“He has competed since he got here. He practices really, really hard. He deserved to start. You can ask our receivers. He’s a very, very talented young man.
“He’s got a long way to go. He’ll make mistakes but he will learn from those mistakes. He has a chance to be a very good player down the road,” he said.
“Overall, there were some really good things for some young guys going in there. It certainly wasn’t perfect, there’s a lot of room for improvement. I’m looking forward to those guys taking the next step.”
Day did not offer an update on the availability of Banks, Brown and safety Josh Proctor for Saturday’s match-up of No. 3 Ohio State and No. 12 Oregon at Ohio Stadium. Proctor suffered a shoulder injury during last Thursday’s game.
Defensive coordinator Kerry Coombs said Burke made a good impression right away after enrolling at Ohio State in January.
“He had a really good spring so we knew we had something. He had a really good offseason and he continued to play all through training camp. He continued to line up and play well against the best receivers you will ever see. He competes. He has a lot of growth and a lot of improvement ahead of him,” Coombs said.
“I talked to him at length about being nervous and he said he was, which I was glad to hear because if he said he wasn’t he’d be lying. Being nervous just means it’s important to you. When you line up and play every day against the guys we have (at receiver) that prepares you. You are going to get prepared.
“Chris (Olave) and Garrett (Wilson) can do so many things to any defensive back in one on one environments. When he lines up against those two guys he’s able to handle it and he’s reasonably unflappable even if they beat him. There was a day in, day out lack of fear of going against the very best players.
“I expected him to play well. It would have been disappointing if he hadn’t played well,” he said.
Olave said, “I’m a huge fan of Denzel. I’ve seen his growth since he got here in January. I’m not surprised to see him out there. I think he’s one of the top guys we have.”