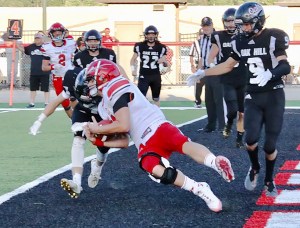 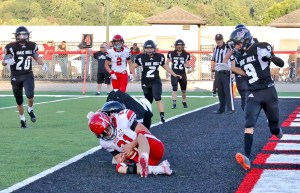 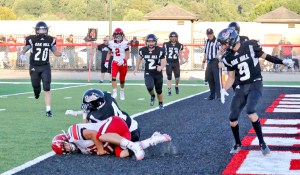 Rock Hill Redmen tight end Brayden Malone makes a what appears to be a nice catch in the end zone for a touchdown. Malone had to come back for the ball but clearly keeps his hand and arm under the ball in the third photo. However, the play was rule no catch and Malone did not get credit for a touchdown. Rock Hill still won the game 23-0 over the Oak Hill Oaks on Friday in the Redmen season opener. (Photos By Tim Gearhart)

Drew Roe might not be in the Air Force, but he’ll be flying footballs all over Redmen Stadium on Friday.
The Portsmouth senior quarterback is just 5-foot-8, 150 pounds but he doesn’t let his size be a deterrent.
In a 56-29 win over Cincinnati Deer Park last week, Roe was 21-of-29 for 417 yards and three touchdowns and also ran 22 times for 113 yards and scored five TDs as he accounter for 530 total yards.
“He reminds you of Johnny Manziel. He can run around and buy time and then make a play,” said Rock Hill coach Mark Lutz.
“He’s fast and strong, he has a strong arm and he is very accurate. That’s hard enough to defend and then you throw in his ability to scramble and run the ball and our defense has its work cut out for it.”
Dariyonne Bryant had four catches for 115 yards and a TD and Reade Pendleton six grabs for 112 yards and a score.
The Trojans (3-0) have scored 125 points this season and have scored five or more touchdowns in each game.
Rock Hill (1-0) missed the first two games of the season but were able to blank the Oak Hill Oaks 23-0 on the road.
The Redmen had interceptions from Chanz Pancake and Levi Jiles against the Oaks and will need a strong pass defense against Roe and the Trojans.
The Coal Grove Hornets will entertain the South Point Pointers in the OVC opener for both teams.
Coal Grove (1-1) and South Point (0-2) both had games canceled last week due to COVID restrictions.
The Hornets rolled past Beaver Eastern 54-8 two weeks ago while the Pointers suffered a 14-8 loss at Alexander when they had a drive stall inside the 10-yard line in the closing minutes.
The Fairland Dragons (2-1, 0-1) will be playing out of conference on Friday after playing their first OVC game at Ironton last week.
The Dragons travel to play the Tolsia Rebels (0-2) as they hope to bounce back after a tough 20-14 overtime loss at Ironton.
The Chesapeake Panthers (0-2) at Gallipolis Blue Devils (2-1) OVC opener has been canceled due to COVID issues at Chesapeake.
Another local team is crossing the bridge into West Virginia as the Symmes Valley Vikings (3-0) played their first road game and will look to stay unbeaten against the winless Tug Valley Panthers (0-2).