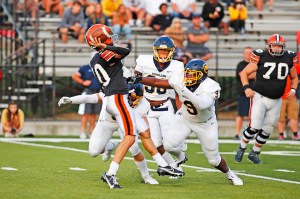 Ironton Fighting Tigers’ quarterback Jon Wylie (10) gets off a pass under pressure during Friday night’s game against the Cincinnati Moeller Crusaders. Ironton lost to the Division 1 power 25-7. (Photo By Josh Wilson)

It was quite the affair last night as television cameras made their way into Tanks Memorial Stadium for the matchup between the Ironton Fighting Tigers and the Archbishop Moeller Crusaders.
While the Tigers did fall to the Crusaders 25-7, Ironton put up a better fight against their visitors from Cincinnati than the score would initially indicate.
The beginning of the game saw Ironton receive the ball and their initial drive sputtered out, giving possession to the Crusaders.
Moeller ate up yards and clock as they collected four first downs in their march from their own 24-yard line to a 9-yard touchdown pass from Van George to Tennell Bryant.
George was filling in for starter Noah Geselbracht who was out with a non-COVID illness.
It seemed almost in a blink of an eye that the Ironton possession had ended and George found Bryant again this time for a 57-yard touchdown grab, leading Moeller to lead Ironton 14-0 at the end of the first.
It seemed that the trend of this game was going to be offensive dominance for the entire game. Nevertheless, the Tigers showed their resolve starting in the second quarter to keep the game closer than what the first quarter would have indicated.
Ironton had a promising drive at the beginning of the second quarter which only ended because of a fumble in Moeller territory.
Despite that turnover, Ironton was bound and determined to keep Moeller out of the end zone and they succeeded in keeping Moeller scoreless for the rest of the half.
Of particular note is when Moeller was facing a fourth down at the Ironton 45-yard line, George threw a long pass into the end zone.
Ironton’s Ty Perkins had the perfect opportunity to leap into the air to intercept that pass, however, he chose to knock the ball down in a play that even Moeller fans complimented as an extremely smart football play.
Despite the excellent field position that Perkins’ intelligent decision provided the Tigers, they were not able to score on the ensuing drive leading them to trail Moeller 14-0 at the half.
The second half kept the same theme as Ironton could not really find any offensive success.But, their defensive effort kept the Moeller from imposing their will despite the Tiger defense being on the field for long periods of time.
They held Moeller to only a field goal in the third quarter. The key play in keeping Moeller out of the endzone that quarter came courtesy of Nate Cochran. Facing a fourth and goal from the 6-yard line, George was scrambling in the left flat toward what seemed to be an easy touchdown.
Cochran came down the line and completely smothered George’s run leading to a turnover on downs at the 1 yard line.
The fourth quarter did see Moeller find the end zone on a 17-yard reception to Brandon White.
Ironton did find a touchdown of their own with only 23 seconds left in the game when Jon Wylie connected with Aaron Masters for a 53-yard reception.
These touchdowns lead to a final score of Moeller 25 Ironton 7 in a game that was more hard fought than the score and the statistics would indicate.
Cin. Moeller 14 0 3 8 = 25
Ironton 0 0 0 7 = 7
First Quarter
CM – Tennell Bryant 9 pass from Van George (pass failed) 3:16
CM – Tennell Bryant 57 pass from Van George (Merk pass from Thompson) 0:57
Third Quarter
CM – Williams Steele 26 field goal 2:21
Fourth Quarter
CM – Brandin White 17 pass from Van George (Van George run) 5:55
Irn – Aaron Masters 52 pass from Jon Wylie (Matt Sheridan kick) 0:25
———
CM Irn
First downs 14 13
Rushes-yards 30-146 39-145
Passing yards 257 85
Total yards 403 230
Penalties 12–101 3-35
Fumbles-lost 2-0 1-1
Punts 1-50 3-34.7
Individual Leaders
RUSHING-Moeller: Jordan Marshall 9-46, Alec Weeder 9-44, Van George 7-40; Ironton: Amar Howard 3-12, Landen Wilson 13-49, Jacquez Keyes 7-23, Lincoln Barnes 1-4, Jon Wylie 6-minus 4. Ashton Duncan 3-10
PASSING–Moeller: Van George 14-22-0 257 3TD; Ironton: Jon Wylie 6-15-3 TD.
RECEIVING–Moeller: Joshua Kattus 4-82, Tennell Bryant 2-66 2TD, Jordan Marshall 1-30, Jared Merk 3-31, Brandon White 3-24 TD; Ironton: Aaron Masters 2-57 TD, Ty Perkins 2-20, Landen Wilson 1-7, Amar Howard 1-1.

Rock Hill Redmen running back Owen Hankins (3) gets a block from teammate Lane Smith (60) on a Portsmouth defender... read more