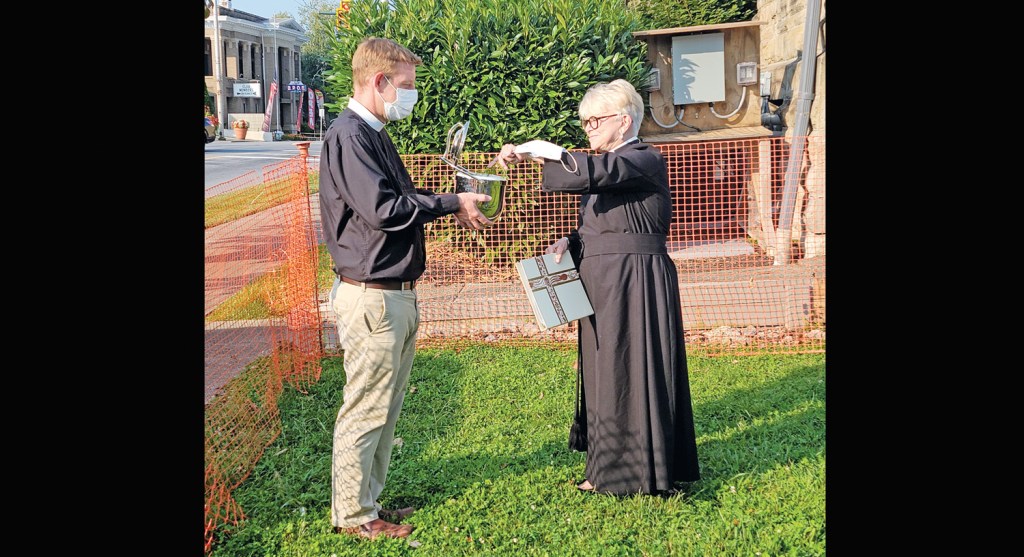 Rev. Paul Bennett, of the All Saints Church in Portsmouth, holds a vessel of holy water as Rev. Sallie Schisler, of Christ Episcopal Church, blesses the workers and the construction site of a new building at the Ironton church on Tuesday morning. (The Ironton Tribune | Mark Shaffer) 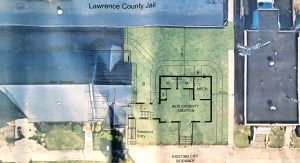 A pair of blessings, and then the construction got underway.

That was the scene on Tuesday morning at Christ Episcopal Church on the corner of Park Avenue and Fifth Street in Ironton.

It took two years and quite a bit of fundraising to replace a building that was torn down about five years ago.

“The old one was sinking into the ground,” Schisler explained. “So, we had to take it down. It was that or it was going to fall down.”

The new building will be on the same plot of ground, but will be smaller, at around 2,000 square feet of space.

“It will meet all of our needs,” she said. “It will have bathrooms, including handicapped bathrooms, a sacristy and then there will be a lift to take people up into the church. So, for the first time in 70 years, the church will be handicapped accessible. We are pretty excited.”

The building will also have a basement.

The project is going to cost around $400,000 and “it is totally funded by parish members and parish friends,” Schisler said. “We are hoping that it will be a beautiful addition to Park Avenue. It will have stone facing and it will be pretty.”

Because the land isn’t that stable, they began by having a geological survey done and most of the cost of the building will be putting in strong foundation.

As for when the building is completed, Schisler said that it will be probably take eight or nine months.

“It is really fun and a pleasure to get started,” she said.