GENERATIONS: A life in print 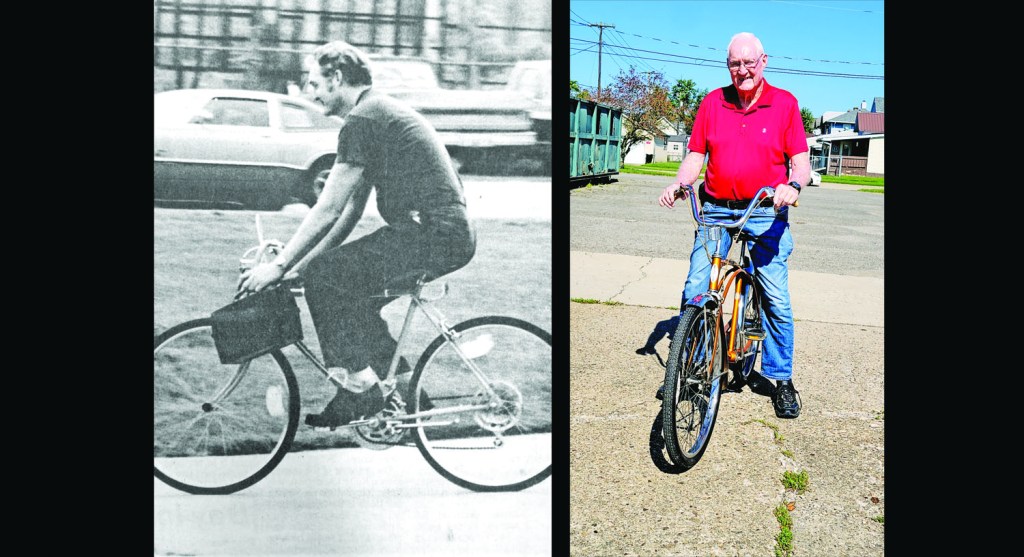 Richard Schwab started off as a janitor, retired as press foreman

For Richard Schwab, working in the newspaper business is how he began and ended his career.

In his teens, he started off as a janitor for The Ironton Tribune and retired from the Portsmouth Daily Times as a journeyman pressman, which means he was the guy who ran the big presses that the newspaper is printed on.

His dad was a janitor in the back shop of the newspaper and his mom ran a one-room grocery store.

“So, there wasn’t a lot of money coming in,” Schwab said.

His dad would bring him clean clothes and the younger Schwab would work six hours as a janitor and cleaning the offices up. After he was done, he would go back to where the newspaper rolls were stored and put a piece of wood over the top of those and sleep until it was time to get up, shower and head to school in the morning. He expanded into writing sports stories for $4 an article.

“I did that five nights a week, Monday through Friday,” Schwab explained. He kept that up until he graduated from school.

He expected to get hired in the composing room, but the job went to someone else, so he got a job at ARMCO.

“I worked 12 days out of six months. They just called you when they needed you,” he said. “Then my dad called me and said the publisher wanted me to come in for an interview for a press room job.”

He got that job in 1959 and spent four years as an apprentice and worked up to journeyman and eventually became the foreman. He stayed there until 1981 and then he went to Robert’s Printing for about a year.

He was visiting the Portsmouth Daily Times to see their new press and ended up helping them out and getting a new job. He knew the PDT pressmen from the local union meetings.

“They were having trouble getting the plates to print,” Schwab said. He looked at the coating that was put on the plates. It was a dark brown. He asked to see the refrigerator they stored the coating in after they mixed it and was told they didn’t have one.

“I told them that was the problem,” he said. He got a new bottle of plate coating and was helping the pressmen coat plates so they could get started when the PDT’s publisher came in and asked who he was and what he was doing. The foreman explained that Schwab was from the Ironton paper and had stopped by to fix their coating problem.

“Before I got home, my wife, Gloria, got a phone call asking if I wanted to work there,” Schwab said. He worked for two days a week for two weeks before he was hired on a full-time basis.

“And then I was there until I retired in 2005 as the production manager,” Schwab said.

His job there at the PDT was a hot one, he spent his shift pouring hot lead so a Linotype machine could print the words that went on the plate that went into the press and made the newspaper pages.

“We re-melted the lead after every paper,” Schwab said, adding the temperature to melt lead was 1,700 degrees. “No air conditioning in the building, one roof fan in the section.”

The lead to a small disagreement with his wife.

“We were living in an apartment and she said ‘I think we need to get us an air conditioner.’ I said ‘What are you talking about? It’s not even hot in here!’ She said ‘It is, I’m sweating.’ I was used to the heat off those melting pots.”

Schwab is well-known for the gold Schwinn bike he rode to work at The Ironton Tribune.

He bought it for $10 off a firefighter friend of his brother in 1960. During the time of high gas prices in 1979, he was featured in a front-page picture.

He still rides the same bike around Ironton.

Over the years, the mechanics of putting words to ink changed from lead to paper to computers that sent the whole page back to a machine that printed the plate for the press.

Schwab married Gloria June Pinkerman in in 1961 and they will celebrate 61 years of marriage in January. They had two children, Angie and Richard II, eight grandchildren and seven great-grandchildren.