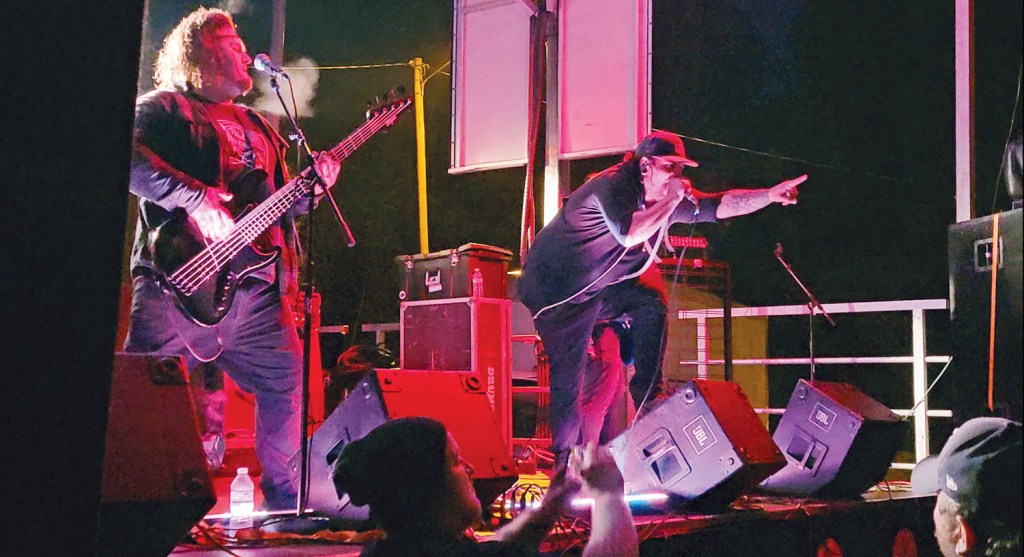 As the sun went down on Saturday, Revision, Revised took the stage at the first Grovefest Music and Arts Festival in Paul Porter Park in Coal Grove. (The Ironton Tribune | Mark Shaffer) 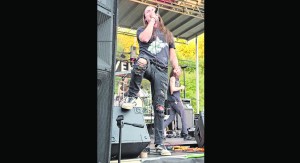 Eli Fry, vocalist of Curses. The stage at the music festival was once used on the Warped Tour. (The Ironton Tribune | Mark Shaffer)

COAL GROVE — It was loud, everyone was dressed in black, it rocked and it was a success.

That was the main takeaway from the first Grovefest Music and Arts Festival on Saturday as an array of metal acts took to the stage in Paul Porter Park in Coal Grove.

“It is definitely a success,” said Charlies Wilds, vocalist for the band Revision, Revised and creator of Grovefest. “We had an $11,000 investment and we have broken even on ticket sales already.”

And that means there will be more Grovefests in the future.

“So, we do plan on growing it bigger and better every year. We worked out the kinks that we have had already, so we know what to do next year,” he said.

Wilds wanted to put on a music festival similar to the ones he went to in the ‘90s and he wanted for once for his band to play in front of a hometown crowd. Revision, Revised has only played in Coal Grove once before.

Of the numerous bands scheduled to play, a couple had to drop out of the festival.

“13 of the 15 made it,” Wilds said. “What Drives the Weak had to drop out because of COVID-19 and Left to Suffer didn’t make it because of personal reasons.”

Wilds said after the festival wrapped up, he was going to take about a month off before planning the next one.
He spent the early part of the week recovering from bronchitis but still spent three 16-hour days setting up signs and getting the stage, which was used on the Warped Tour, set up.

Despite all that, he was happy to see it all work out.

“I am a little emotional,” Wilds said. “To see this type of music in our area, it doesn’t happen that often because people don’t want to take that risk and put up the money to bring in something for our youth. I know that everyone likes metal, not everyone likes hard rock but, if you come and see these bands, there is so much energy. And they are all so nice. We just want to play.”

Travis Wood, lead singer of Of Serpents, said the Tennessee-based band was happy to make the five and half-hour trip to Ohio to play. The band has known Wilds for a long time and he was the first one to give the band a clothing endorsement with Wild’s company Hollow Grave back in 2016.

“We’ve kind of built a relationship with him. He’s a cool guy and he has always supported us and we’re glad that we actually got to come back to my roots and throw down a little bit,” Wood said, adding he was born in Huntington, West Virginia and moved to Tennessee when he was 10 years old.

And he said that they didn’t care if Grovefest was a smaller festival.

Another band more than happy to play Grovefest were headliners VRSTY from Brooklyn, New York.

Singer Joey Varela said they played a gig in Buffalo on Friday and then drove six and half hours to Coal Grove.

“Aside from the fact I love to play music, there is something cool about being a part of something that is the first time ever,” he said. “You get to be part of a small community of people who know it and it makes it just more like friendly and family-ish. I’ve always wanted my music to be a part of something like that.”

Varela said he was surprised to hear that there weren’t more concerts in the Tri-State.

“I would have figured that Ohio would have more because some of the best bands come from Ohio,” he said. “But this is awesome, having people tell me there aren’t a lot of shows here and then showing up and having people ready to hear us, that is super exciting.”