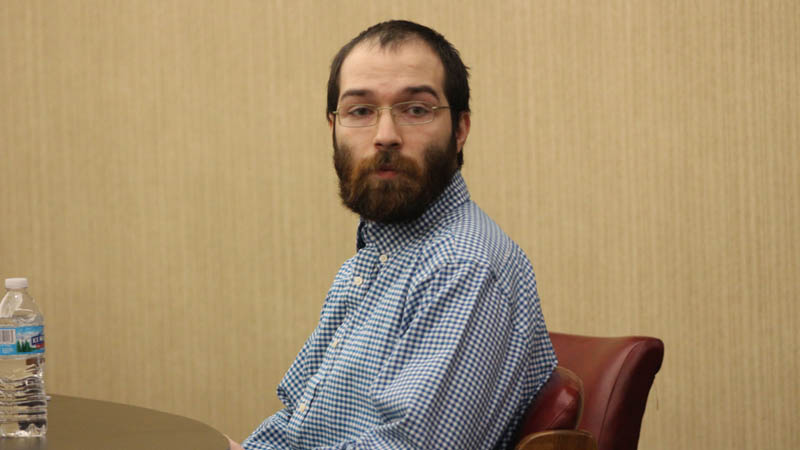 Arron Lawson, 24, of Pedro, suspect in a 2017 quadruple homicide, waived his right to a trial by jury Tuesday in the courtroom of Lawrence County Common Pleas Judge Andy Ballard. He is instead opting to have his case tried to a three-judge panel. (Photo courtesy of Courtney Hessler/ The Herald-Dispatch)

The Ohio Supreme Court has upheld the death penalty conviction of a Lawrence County man who was found guilty of the murders of four of his relatives.

After the murders, Lawson fled into the woods setting off a two-day manhunt by more than 100 local, regional, state and federal law enforcement officers. It ended with Lawson surrendering to a deputy. He was taken to the Lawrence County Courthouse to be interviewed by detectives and confessed to the murders.

“On Oct. 11, 2017, Aaron Lawson brutally murdered four people in Lawrence County,” said Lawrence County prosecutor Brigham Anderson on Thursday. “And since that day, it has been my mission to assure justice was served for the victims, victims’ families and the entire community.”

Lawson is incarcerated at the Chillicothe Correctional Institute. He is scheduled to be executed on Jan. 6, 2026.

In Ohio, all cases with a death penalty sentence are automatically appealed to the Ohio Supreme Court and Lawson’s case was heard in March.

In that hearing, Lawson’ lawyer, Thomas Rein, who is based in Cleveland, asked that Lawson’s conviction and death sentences be overturned and that he get a new trial because he was never tested to see if he was competent to stand trial and to assist his lawyers in his own defense. Rein didn’t represent Lawson during the trial.

He said that the court essentially ignored Lawson’s competency by not having the test done.

Anderson argued that a competency hearing was never requested, Lawson’s defense lawyer never raised the issue and that there wasn’t any indication that Lawson wasn’t competent as he was involved in hearings and he seemed to understand what was going on.

Anderson said his main point was that Lawson, from the very beginning of his capture through the last day of his trial, “always appeared to be articulate, intelligent, know the ramifications of his decisions and he made a strategic decision to waive the jury.”

In his appeal to the Ohio Supreme Court, Lawson raised five propositions of law: that he should have had an exam by an expert to verify that he was competent to assist his lawyers with his case or that the court should have ordered a competency hearing; that his guilty plea and waiving his right to a jury trial were invalid because they were not “voluntary, knowing, and intelligent” as the court didn’t ask why he was not following his lawyer’s advice or inquire more deeply into the effects of the medication he was taking, and the court accepted the waiver and pleas without a hearing on his competence; that his legal counsel was ineffective because it didn’t request a competency hearing; that the three judge panel that weighed nonstatutory aggravating circumstances against him and discounted mitigating factors by discussing facts of the crime; and the constitutionality of Ohio’s death penalty.

In a 74-page slip opinion on State vs. Lawson, the Ohio Supreme Court overruled each of the propositions of law.

The court said its ruling was proportionate to the severity of the crime.

“We further determine that the death sentences for these crimes are proportionate to sentences approved in similar cases,” the court said in its opinion. “We have approved death sentences in cases combining multiple murders with one or more child murders.”

They deliberated for four hours before reaching a unanimous decision to sentence Lawson to death for each of his four aggravated murder charges and stated that the aggravating circumstances outweighed the mitigating factors in the case. Because the death penalty was invoked, an appeal to the Ohio Supreme Court was automatic.