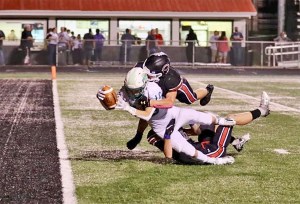 Fairland Dragons’ receiver Brycen Hunt tries to get into the end zone while Coal Grove Hornets’ defenders Jarren Hicks and Whyatt Mannon bring him down shy of his destination. (Photo By Tim Gearhart)

COAL GROVE — With treacherous weather in the distance, the Fairland Dragons brought their own thunder to Lemaster Stadium on Friday night in defeating the Coal Grove Hornets 49-16 in an Ohio Valley Conference game.

From the opening drive of the game, the stacked Fairland offense overwhelmed the Hornets.

The tone was set very early. On the second play from scrimmage, Brumfield broke free for a 56-yard touchdown.

The Hornets (4-4, 3-3) opening offensive drive was the polar opposite, fumbling the first snap for a 12-yard loss and punting two plays later.

Jackson would be intercepted by Coal Grove senior Clay Ferguson on the next drive, but the Hornets could not take advantage of the rare Dragon miscue.

Instead, Coal Grove would again fumble, immediately turning the ball back over to the Dragons.

Brumfield made sure Fairland (7-1, 4-1) did not squander this opportunity, rushing in from three yards out for his second touchdown in the first five minutes of the game.

The Dragons’ defense quickly regrouped, sacking Mannon on a crucial 4th down and forcing a turnover on downs. Jackson would take to the air on the following drive, hitting Leep for a 38-yard gain and a 20-yard touchdown pass just three plays later.

Down 21-0 to start the second quarter, the Hornets pieced together their best drive of the game, a grinding ground attack led by Chase Hall, Gavin Gipson and Steven Simpson.

The drive, starting on their own 22-yard line, was highlighted by a 34-yard scramble by Hall.

The junior running back would score four plays later on a powerful 8-yard touchdown rush on a critical 4th down play. The Hornets converted the two-point conversion, closing the scoring gap to 21-8.

Unfortunately, that’s as close as the Hornets would get for the remainder of the contest. Fairland would quickly answer with even more slick offensive schemes. A well-disguised shovel pass from Jackson to Leap connected for 23 yards. Brumfield would power for 18 more yards on the ground before Jackson himself rushed in untouched for a 19-yard score.

Coal Grove tried to keep it close, but a misguided reverse play on 4th down with just over a minute left in the first half resulted in a 10-yard loss, handing the ball back over to the Dragons with excellent field position.

The Hornets did ramp up their defensive effort in the second half, holding the Dragons to just one score in the third quarter, a 15-yard TD pass from Jackson to sophomore receiver Brycen Hunt. The Coal Grove offense also found its groove on a long, clock-eating drive in the fourth quarter. Keeping it on the ground the entire drive, Hall punched in his second touchdown of the game, a 5-yard score with just under five minutes left in the game. The Hornets were again successful on the two-point conversion, making the score 41-16.

However, on the opening play of the subsequent drive, freshman backup quarterback Keegan Smith rushed for a huge 30-yard gain. A facemask penalty added 15 more yards, placing the ball at the Coal Grove 17-yard line.

Sophomore running back Garrett Spence would rush into the end zone untouched on the following play, followed by another untouched rush by Smith for the two-point conversion.

Barnes goes his own way as he heads to Marshall