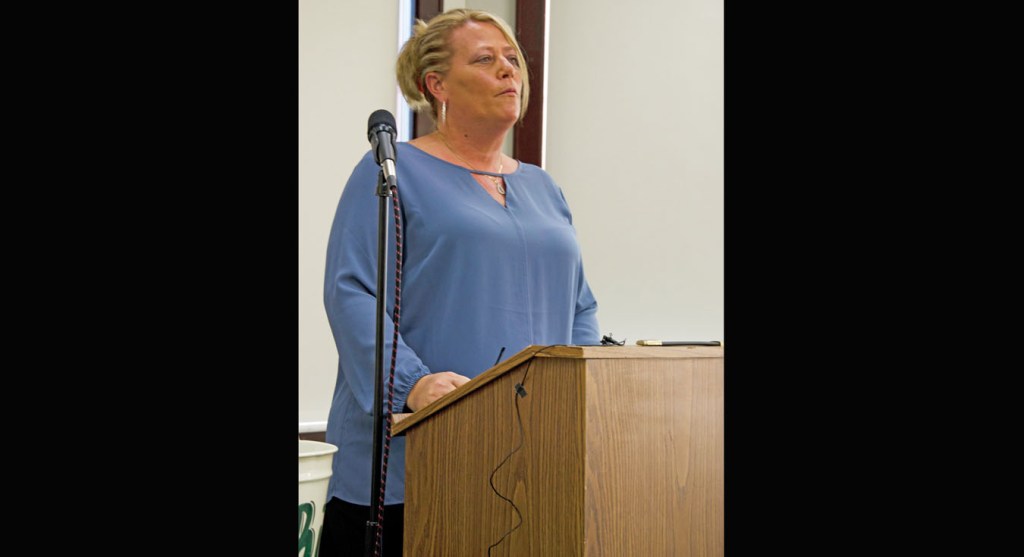 CHESAPEAKE — The former mayor of Chesapeake issued a statement on Tuesday, detailing reasons she resigned last week along with four council members.

Kim Oldaker announced at the regular monthly meeting of council on Oct. 4 that she was leaving the position and was joined by council members Allen Barrett, Beth Brown, Larry Estep and Lonnie Salyers in resigning.

Oldaker, the village’s first female mayor, was elected in 2019 and was in her first term.

In a joint statement with the council members to media, Oldaker began by outlining what she said was the state of the village when she took office on Jan. 1, 2020.

“There were only two police officers and the cruisers were being held together with duct tape,” the statement read. “Citizens in the village were distressed at the drug traffic moving through the village and the lack of tickets being written to bring in revenue. Chesapeake was not bankrupt, but only had approximately $225,940.70 in the village bank.”

The statement went on to point out that, as of Oldaker’s resignation date, six officers are now employed and the village has three new police cruisers. It stated that accounts now hold “$373,292.29 in the fiscal department, with $44,023.98 available in the court clerk account.”

The statement cited the mayor and resigning council members had a contentious relationship between with council member Paul Hart during her tenure.

Hart, who has held a council seat for more than three decades, is the sole member of council at present. He and Nate Ittig were the only members not to resign. Estep, who was mayor pro tempore, named Ittig as mayor pro tempore just before resigning. Ittig then became acting mayor, then mayor on the following day, Oct. 5, leaving five vacancies on the council.

The statement described disagreements between Oldaker and Hart and made a number of allegations against Hart, which could not be corroborated.

Oldaker did include a copy of an Oct. 20, 2020 police report, written by officer Steven Woodyard responding to an incident at village hall.
Woodyard stated that he pulled into village hall at 5:57 p.m. and observed a “heated discussion” between Hart and Oldaker on the parking lot of village hall.”

“Councilman Hart had his finger directly in Mayor Oldaker’s face while screaming she needed professional help,” Woodyard wrote in the report.

Woodyard stated he went into the building and observed Lawless exiting the office with Oldaker. He said he was advised by Oldaker that Lawless was there to assist with payroll and that, though she had resigned, village council has accepted her resignation letter “and her offer to help, if needed.”

Woodyard stated that he went into village hall and Lawless advised that she would leave without incident to avoid further confrontation.

Woodyard said he walked Lawless to her car and, while she was “getting in her car, Councilman Hart took pictures of her vehicle. Councilman Hart advised Theresa that she would have to testify if called into court because Mayor Oldaker was breaking the ORC (Ohio Revised Code). Theresa then left the premises without further incident.”

Woodyard said, Hart contacted a deputy to arrive at the location.

Woodyard said, Hart requested that a report be filed after speaking with the officer.

“Paul stated that he observed a white vehicle on the lot,” Woodyard wrote. “Paul stated that he had an out-of-state officer illegally run the tag to the vehicle that confirmed that it belonged to Theresa Lawless. Paul said that he felt he had the right to run the plate due to him being a councilman.”

Woodyard said that Hart told him that he and council member Jim Smith “went to the lot and the vehicle was still there.”

Woodyard said he also obtained a written statement from Hart. He said he tried to contact council member Kenny Wolfe, but was unsuccessful.

He said he spoke with council member Danny Burd.

Burd, Wolfe and Smith resigned from council in the following months, prior to last week’s resignations.

No one was charged in Woodyard’s report and he said he forwarded it to the county prosecutor for review at the time.

In addition to citing disagreements with Hart in their resignation statement, Oldaker, Barrett, Brown, Estep and Sawyers also cited disagreements with three people running for council this year — Lisa Blake, Drew Griffin and Jacob Wells. The statement made several allegations against them, which could not be corroborated.

As Blake, Griffin and Wells are running unopposed, they were assured to begin their terms as council members in January 2022.

Following the resignations, Ittig said he would be appointing Blake, Griffin and Wells to three of the vacant council seats at the November meeting of council.

In the resignation statement and a copy of the police report from last year, Oldaker also provided a printout of what was stated in the statement as the ending balance of her term in office.

When contacted by The Ironton Tribune on Thursday, Oldaker said she had no further comment outside of the statement.

“I think it speaks for itself,” she said.

When asked if any formal complaint had been made on any of the allegations in the statement, she declined to comment, stating that the statement “was written as a group effort” and she did not want to speak as an individual on the matter.

Hart said on Friday that he did not see any reason outlined in the letter from Oldaker and the council that “justified my response.”