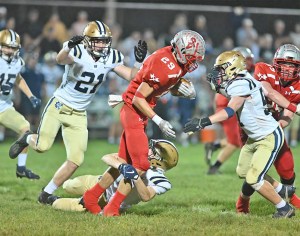 The Vikings expected a tough game and it was and they were looking for a win and they got it as they held on for a 34-28 win over the Portsmouth Notre Dame Titans on Friday in a showdown in the Southern Ohio Conference 1.

“We knew this was going to be a big ballgame,” said Vikings’ coach Rusty Webb. “Notre Dame gave us their best shot and we were able to make a few more plays than they did.”

Symmes Valley stayed unbeaten at 8-0 and is 3-0 in the SOC with a big showdown next Friday at Northwest in a battle for the league title.

“Notre Dame is a very good team. They are a fast and athletic team. You have to be very disciplined against them because of the style they play. But we did a good job. We matched them on special teams play and that was big.”

Stepping up for the Vikings’ offense was Levi Niece who ran 17 times for 124 yards and scored 3 touchdowns in the second quarter.

All the Vikings yardage came on the ground as they ran 46 times for 248 yards. Ethan Patterson had 59 yards on 12 tries and Grayson Walsh 48 yards on 11 attempts.

Gavin Hart ran 18 ties for 124 yards and 2 TDs with quarterback Wyatt Webb 5-of-20 with 2 interceptions and a touchdown. Dylan Seison had 100 yards on 4 catches.

Walsh got the scoring going from the defensive side as he picked off a pass and returned it 65 yards for a touchdown. Gavan Yates kicked the conversion.

Notre Dame came tack to take the lead on a 25-yard pass from Webb to Matt Boldman and Seison kicked the conversion.

The Titans forced a punt and Nolan Heiland returned it 80 yards for a touchdown and it was 14-7.

But the Vikings took control with three touchdowns in the second quarter.

Niece scored on a 1-yard run and after forcing a punt drove for another score with Niece finding paydirt from 6 yards out to go up 21-14.

Hart got through the Vikings’ defense for a 58-yard scoring run to tie the game, but Niece scored on the last play of the half on a 1-yard run and it was 27-21.

The teams exchanged turnovers to begin the second half and then the Vikings scored what proved to be the winning touchdown as Brayden Webb bulled his way into the end zone from 6 yards out and Yates’ kick made it 34-21.

The Titans recovered an onside kickoff and drove inside the Vikings’ 20-yard line only to have the defense hold.

Symmes Valley got a couple of first downs before having to punt and then the defense stopped the Titans on downs and ran out the clock.

“Our defense played well, especially in the clutch. We came up with some big turnovers and then our offense was able to put the game away at the end,” said Webb.

“We did a great job of playing team defense. We had a few breakdowns but that’s going to happen against a good team,” said

Wyatt Owens had a caused fumble and an interception.

The Vikings are hoping to repeat the same scenario as two years ago when they won at Northwest to take the title.

“Northwest is big, strong and physical,” said Webb. “Their depth has helped them play through injuries. We’ll have our hands full, but this is for all the marbles.

“Both teams will be ready to play. This is a winner take all.”