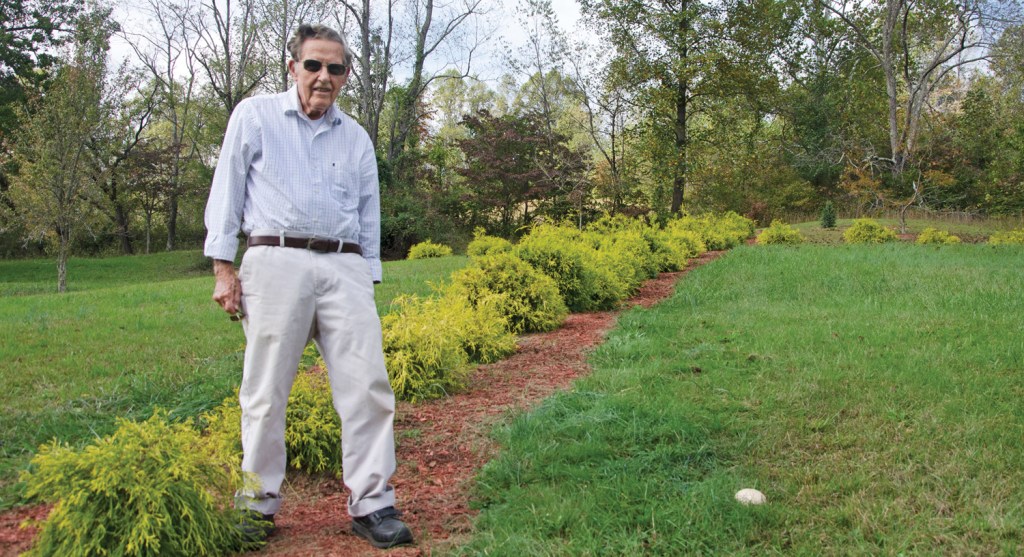 Bill Neville, 94, of South Point, is one of the caretakers of the grounds at Deering Community Missionary Baptist Church. (The Ironton Tribune | Heath Harrison) 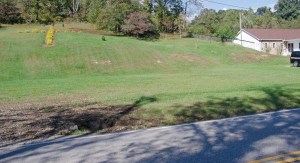 Over the past two years, Neville, 94, of South Point, has worked to plant shrubbery in the shape of a large cross on the hill overlooking the church.

He said the cross is comprised of Japanese false cypress.

“I kept adding to it,” he said of its growth.

Neville said for the planting, he had help from his grandson, great-grandson and members of the church.

“If they hadn’t helped, I never would have got it done,” he said.

Neville, a World War II-era veteran who served in the occupation of post-war Japan, is retired from AK Steel and Armco. Now living in South Point, he serves as a caretaker for the church grounds, tending to the flowers and shrubbery.

Neville was at the church last week, inspecting for any damage from the storm a few days earlier, tending to the mulch and watering the plants.

“We also have someone else who mows everything,” he said.

Bordering the cross, which is so large, it needs to be seen from the road to take in its scale, are four young blue spruce trees, with two at its top and two at its base.

In between the top two, red maple tree has also been planted.

“That will someday be 40-60 feet,” Neville said of the trees, which were donated.

Neville says the shrubs making up the cross are not fully grown yet, either.

“They should get to four or five feet,” he said. “In another year, they will be more noticeable.”

Neville said, when creating the display, he was thinking of something future generations could enjoy.

“I just thought of making something that would last a long time,” he said. “And I wanted to make something people could enjoy, whether they were members of this church or not, as they drive by.”

Neville said he drew inspiration from the crosses put up by the Rev. Bernard Coffindaffer. A native of Craigsville, West Virginia, Coffindaffer began erected sets of three wooden crosses along roadsides in his home state, where they became a common sight. His work eventually brought displays to 29 states, as well as countries overseas.

Neville, the oldest man in his church’s congregation (there is a woman attending, Eileen Adams, who is three years older than him, he says), began attending in 1937, when his family came to Deering.

“We moved to where Deering school was on top of the hill,” he said. “

That was the year of the big flood and we went to the river and saw it.”

He said the church was in a small building and had about 30-40 members. Over the years, it’s building has changed twice, he said, with a second constructed in 1952, then its present one finished in 1999.

“We moved just before Christmas that year,” Neville said of the congregation, which now numbers about 100 members.

As for the display on the church’s grounds, Neville said he had one thing most in mind.

“It’s to remember the cross and the church and what Jesus died on the cross for,” he said. 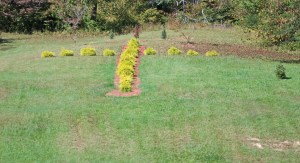