A life behind the lens 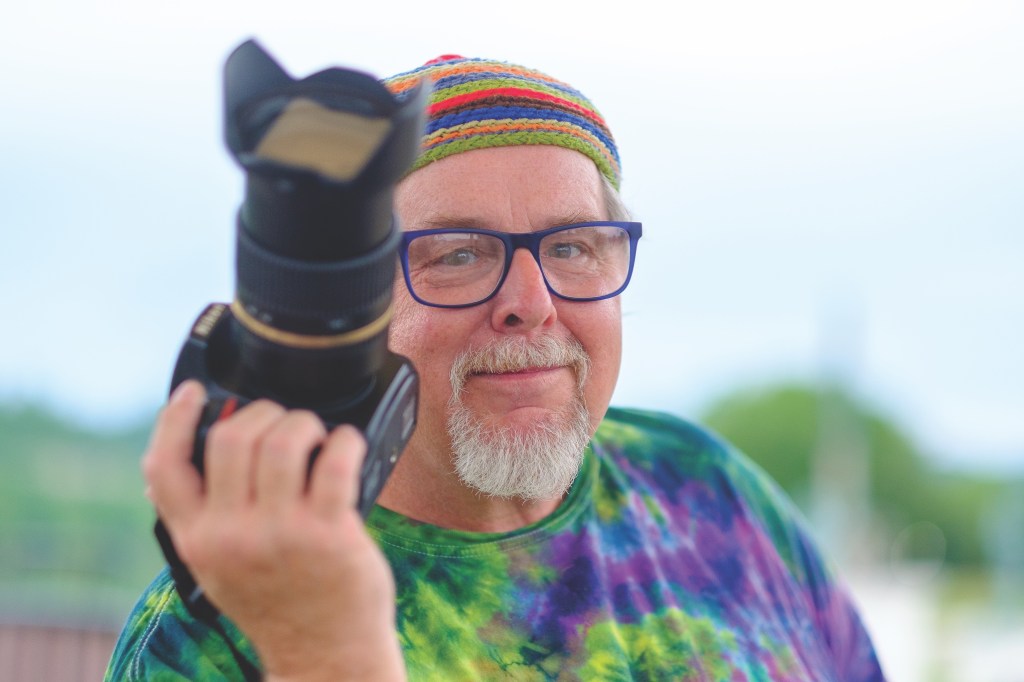 (by Jeremy Holtzapfel, for The Tribune)

Tom Worden was a small child when he received his first camera. It was, in his words, “Love at first picture.”

Now, more than 50 years later, he still feels that same sense of excitement and wonder every time he puts his eye to the viewfinder to frame up a shot. “Photography is a weird thing. It gets its grip on you — it’s like a drug,” explains Worden.

Technology has changed dramatically during his long love affair with photography. His first camera was the type that once all the photos were taken the entire device was sent away by mail to be developed, then some weeks later the printed photographs arrived in the mail along with an entirely new camera. Compare that to Worden’s newest Nikons, which allow viewing of images captured only seconds before.

Although Worden admits he does miss working with film, he said digital photography allows for more people to learn the craft and share their work with the world. “I love seeing the photographs people in our area take. They come to it with so many different skill levels but one thing in common: something they see has inspired them so much that they just need to share it with others. To me, that is photography at its heart, the desire to share with others,” he explained.

A native of Charleston, West Virginia, Worden moved to the Ashland, Kentucky area about 20 years ago when the city was experiencing an arts and culture boom. There were plentiful galleries to display his work and the now-defunct Pendleton Arts Center was just opening.

Although he bemoans the closure of many of the galleries and the PAC, he remains hopeful the town will remerge as a center for arts — pointing to the recent erection of the large bronze sculptures at the riverfront and the sudden popularity of murals in the downtown area. “It seems like it is trying to become an artistic place again, we had all that, and it all went away,” said Worden, “Hopefully we can pull out of this nose dive.”

Photography has provided a career that both fed his constant longing to create while supporting him financially. And, he did it all without any expensive formal academic training. Worden is a “self-taught” photographer, although he is quick to say he has done plenty of studying on his own in order to hone his craft. “I think to be a good photographer, you have to understand art and good composition. I really think it is important for young photographers to study the past photographers – the masters,” he said. Worden also spent hours and hours working his camera settings and developing images on film before he switched to digital cameras and its accompanying computer editing programs.

“It’s been my luck to work in photography both as a passion and a profession, it has been amazing to spend a life looking at things,” he said, adding, “When you give your total attention to a flower, an insect or a rundown, abandoned building it can be a powerful and sometimes life changing experience. Photography is lot of trying to figure out how life works and getting the camera to show that.”

“I think it is also important to work where you are. We all dream of the ‘Big photography adventure’ but chances are, you will spend a lot more time in your own backyard. There are so many interesting, beautiful things around us all the time. You just need to be open to it. When I’m shooting, in the back of my mind, I’m thinking ‘If I were on an assignment for the National Geographic, how would I do this?’ When you aspire to produce the best work you can, it can lead to other things,” he said.

Worden is most known for his works that are created in the pictorialism style. It emphasizes the beauty of the subject and the composition, rather than the documentation of reality. However, Worden has also worked from time to time as a freelance photojournalist and did his share of portraits and wedding photography.

Perhaps some of his most well-known images are of a lightning strikes above the City of Ashland, which are captured from his home. He added, “I’m not a storm chaser but if it comes to town, I’ll photograph it. Same as with the circus.”

Images he’s captured of both the AK Steel Ashland Works mill and the Coke Plant before they were closed are among his favorite, and which he sincerely hopes will endure after he’s gone. “I have images that nobody else of this area has, I want the library to get my photographs,” he said, noting most of the images were captured at night. The factories “were amazing visually and auditorily, it was just amazing to stand near them,” he added.

In addition to the old factories, Ashland has many other muses that have inspired his work. “I like to promote the beauty the Ashland Area. I’ve created a fan page for the Central Park Christmas lights, one for Ashland Area Sculpture and statues, and I nearly finished with one for the Ashland Cemetery. I can see one for the Port of Ashland and the Ashland trail system and one called Stained Ashland… It would be a collection of all the stained glass in Ashland,” he said.

In recent years, Worden has expanded his knack for creating beauty beyond the lens and into sculpture work. A piece titled “Opinions, Black and White and Usually Designed to Harm,” is now on display at the Highlands Museum and Discovery Center. Created with the thorns of a Washington Hawthorn, the piece was inspired by the most recent American election cycle, said Worden, noting “it’s a dangerous piece of art” literally because of the sharp thorns it had to be placed behind glass.

Another piece he created won first price at a Grayson Art Gallery Final Friday Show. It features an oval rock set into a piece of wood. “I love the way the light moves around it as the day progresses,” explained Worden, noting “Even if your work only has meaning to you, it’s okay. It’s about trying to figure yourself out through expression. It is just icing on the cake if other people find something interesting in your work.”

To see more of Tom’s work visit his Facebook page. The Highlands Museum and Discovery Center and the Huntington Museum of Art also have some of his sculptures on display.