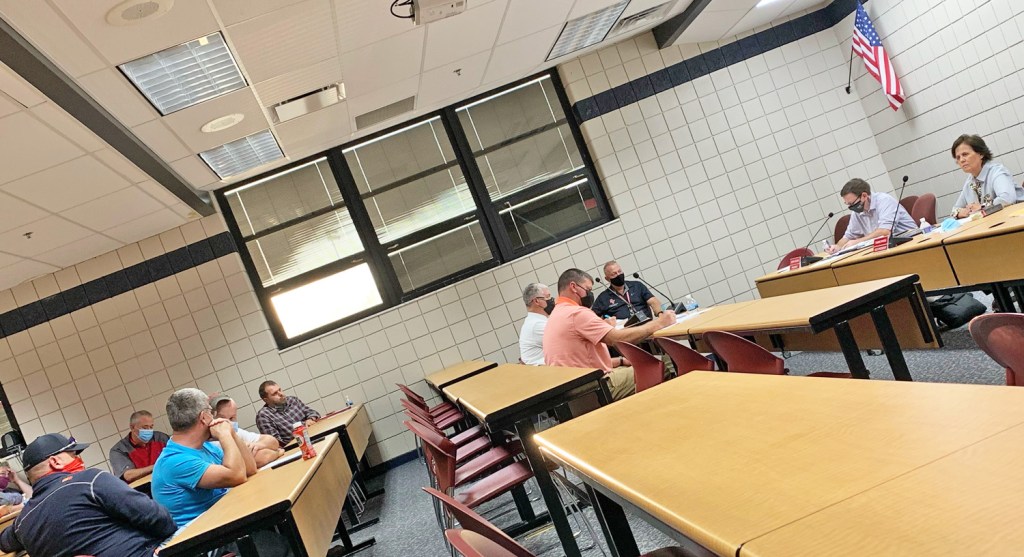 The Symmes Valley Board of Education met Thursday night. A planned clinic at the high school was the focus of the public participation segment of the meeting. (The Ironton Tribune | Heath Harrison)

WILLOW WOOD — Plans for a clinic to be located in Symmes Valley High School drew a vocal crowd to Thursday’s meeting of the district’s board of education.

About 30 people attended the meeting, with speakers during the public participation period voicing their objection.

The plans would establish a school-based clinic, similar to one now open in the Rock Hill district. The Family Medical Center site would be run by the Ironton-Lawrence County CAO as a partnership with the school district.

The clinic would be available to students and staff, as well as the public, who would use a separate entrance and not come into contact with the school.

The facility, which would go into the library of the high school, would also have its own ventilation system, in order to prevent spread of viruses.

School board president Derek Wilson said the matter first came up in a February work session, after superintendent Greg Bowman had visited the Rock Hill facility, which he said was the subject of positive feedback for that district.

The board had recently had a public comment meeting on the clinic, which Wilson said was sparsely attended.

Attendees at Thursday’s meeting said they did not feel that meeting had been publicized well.

Wilson and other board members said they felt communication could be improved and pledged to make a better effort at doing so.

The public participation portion of the meeting was extended twice by 30 minutes each time, in a unanimous vote by board members.

Becky Vissing, a parent in the district, spoke for the bulk of the comment period, reading a series of questions she had prepared in advance to voice concerns of those opposed to the clinic plans.

She asked the board if the clinic was “a done deal,” to which board member Timmy Hayes said it was not.

“There is no contract and we are still negotiating,” he said. “It is not a done deal.”

Vissing also asked about rumors that the junior high would be moved and the preschool would be closing, and board members told her neither would be the case.

Vissing also asked if any board members would profit from construction, which they said would not be the case, stating Collier Construction, of Wheelersburg, would be the contractor.

The board said the district had recently received grant funding from multiple sources, which had to be used in a limited time frame and that the plan would be to use this for the clinic.

Hayes said the primary motivation for the board in considering the clinic is because of the high rate of poverty in the district.

“Many parents can’t take their child to a doctor and many won’t do it,” he said.

Some of those present asked if an existing clinic in Aid could be used for the district’s purposes, but were told it was not sufficient to meet those needs.

Many of those present said they were not opposed to a clinic, if it were built anywhere else, but did not want it to be attached to the school.

“I do not want strangers to have access to children,” Kim Mount, a parent, said.

Hayes asked if Mount had seen the architect’s designs, which he felt were done with security concerns in mind.

The idea of the clinic being located within the high school was the main point of contention from those who spoke, with one parent stating he did not feel that “a cinder block wall” between the clinic and school spaces was assurance enough that it would be secure.

Rock Hill’s clinic is in a separate structure from the three schools of the district, but shares its building with a special needs learning facility.

One parent raised concerns about the effect on parking and traffic. He said bottlenecks are common on State Route 141, a two-lane highway, and that he had recently been stuck in traffic for more than 20 minutes after dropping a student off.

Wilson said this is something that they would consider in future discussions.

Mrs. Pennington, an English teach in the district, said she had spoken with fellow faculty and staff and they shared her opposition to the plan.

“They have a huge concern,” she said, telling the board she “implored them not to continue on.”

There was no vote scheduled on the matter at the meeting and Wilson thanked those present for voicing their concerns, telling them that doing so at a meeting is the right place to do so.

“I never imagined this amount of disinterest,” he said, stating they had heard overwhelmingly positive feed back from Rock Hill. “We should have done better communication and I apologize.”